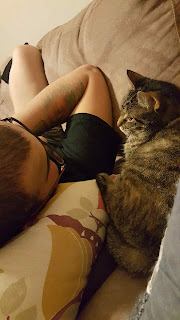 Olivia is the epitome of indifference. She was ever-so-slightly more sociable before Thing 1 and her husband kidnapped her ... but that's only because they have dogs, for which Olivia has absolutely no use. Their other cat, Louie, was raised around dogs, so he has no problem with Roo and Gus. Sometimes I think Louie has no idea he's a cat ... I believe he thinks he is a dog!

But Olivia? She knows she's a cat. Therefore, humans are a necessary evil (they fill up the food and water bowls, and keep the litter box clean). She (barely) tolerates other cats, and ... per the cat-code to which she has sworn allegiance ... she despises dogs.

When it comes to humans, she prefers men. (She's a bit of a tramp.) Olivia likes Thing 1 well enough (sometimes), but she'd much rather be in the company of a man. So, to no one's surprise, on the rare occasion she allows a human to interact with her, she prefers it be Thing 1's husband. 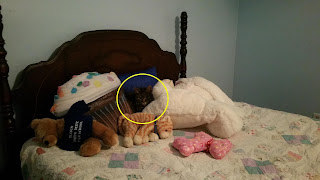 I rarely see Olivia when I visit unless I go upstairs to their guest room, where she holds court, hidden among the pillows. The dogs aren't allowed on the bed, so that 35 sq/ft of real estate has become her sanctuary-of-choice. When she does venture out of her pillow-filled kingdom, it's to either eat, poop, pee, nap someplace else (always out of reach of the dogs), and/or to look out the window and pretend she would be fierce if she were allowed to roam freely ... despite the fact that she was absolutely terrified the few times she made a break for it when the door was held open a split second too long.

On her way to the front window, she'll sashay through the family room as though wearing blinders. She doesn't glance around to see who is there, because, to be brutally honest, she doesn't care who is there  ... unless they are opening a can of tuna.
Posted by Jackie Coleman - Author at 8:06 AM