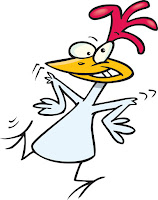 Has anyone (except Southern Baptists) ever been to a wedding reception where they didn't play the Chicken Dance song? After all the obligatory "first dance's", the Chicken Dance is usually one of the first songs played. Upon hearing those distinctive first seven notes, anyone with any degree of ambulatory ability will rush/stagger to the dance floor, flapping their wings and wiggling their tail as they go.

Several years back, when my silly best friend was planning her wedding to her even sillier husband, we were talking about processional songs. I suggested she dance down the aisle to the Chicken Dance song! She poo-poohed my idea and ultimately ended up choosing something more "tasteful".

I still think my commendation would have been the better choice. I can't remember what song she ultimately chose ... the traditional wedding processional or something else ... but I'm positive I'd remember ... as would everyone else in attendance ... if she had had her son "walk" her down the aisle to the Chicken Dance song!
Posted by Jackie Coleman - Author at 3:50 AM