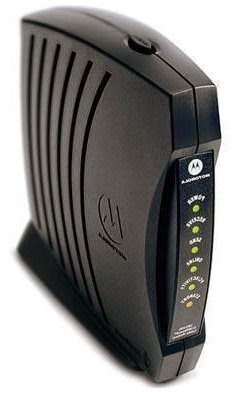 Until the other day, my internet connection on the weekend was shoddy at best. It would go in and out randomly throughout the week ... but I could always count on it going out on Saturday and Sunday mornings.

I would always to do modem/router dance when it went out ... repeatedly unplugging each appliance for 30 seconds before plugging them back in, disconnecting and reconnecting the coax cable, etc. When the connection dropped for a long time, and the dance failed (repeatedly), I would call my ISP ... who made me repeat the dance steps, talking me through the complicated steps of unplugging the modem, then telling me when to plug it back in (in case I can't count to 30 without "professional" help. Infuriating!

They always innocently claimed there was no problem on their end ... but, as if by magic, my modem always immediately came back online. Of course, they always claimed they didn't do anything, but I find it highly suspicious that my internet connectivity can be out for hours, and miraculously comes back on the minute I talk to someone in their call center. Since I own the modem, they wouldn't troubleshoot it any further, so I just dealt with it.

A few years ago I took a good look at my bill and realized they were charging me $9.99 a month (plus tax!) for the use of their modem. I'd had their service for twelve years at that point, meaning I had paid them roughly $1,5000 over the years ... for an $90 modem! Shame on me for not looking more closely at my bill. So, I bought my own modem, with the recommended specifications. Things went well for a while, but not anymore. Since they wouldn't troubleshoot the problem until I bought a new modem, I went out and bought one. And guess what? Yup! The connection still dropped.

The connection still continued to drop, so they are came out Thursday evening, when I was pretty sick. I had rarely gotten out of bed since I came home from work on Wednesday, but I wandered downstairs late Thursday afternoon because my daughter was coming over around 7:00. Walking all the way from my bedroom to the family room seemed like a lot of work, so I did it early to get it over with, and laid on the sofa. Good thing I did, too, because the cable guy (not Larry), came around 4:30. I had completely forgotten they were coming, and had I not forced myself downstairs, I would never have heard the doorbell.

Even though he didn't appear to be a nitwit hillbilly, I did my best not to sidetrack him. But honestly, I was so sick, I didn't have the energy to pester him, even if I had wanted to. My internet connection has not dropped since, so it appears he fixed the problem. So finally, "Internet Hell" (as history will call those dark days) is over ... unless I just jinxed it!
Posted by Jackie Coleman - Author at 10:26 AM