The Bridal Tea Party was a Huge Success


Thing 1's Bridal Tea Party was yesterday afternoon. It was a good, old-fashioned Southern High Tea. A real tea serves finger foods only, and we did veer from that rule, but no one publicly chastised us for serving salads that require a fork, but we did serve the required cucumber sandwiches. (Yum!) One of my sisters was quite confused over the cucumber sandwiches (she's such a Yankee), but you really can't say you had a High Tea without cucumber sandwiches!

For the tea party impaired, the difference between a "high tea" and a "low tea" is that a low tea is earlier in the afternoon and is predominantly desserts, while a high tea is traditionally served at 4:00 p.m. and takes the place of a meal. A high tea offers all the requisite treats, but also includes more substantive foods as well.

When the kids and I go to Savannah we stay at a hotel that hosts a High Tea for it's guests every afternoon. The kids all fell in love with the idea. My daughter's and my boyfriend's daughters hosted a surprise Tea Party for me on my birthday a couple of years ago, and it was so much fun!

For my Georgia Peach sister, who could only be there in spirit, the menu included a relish tray, deviled eggs, spinach popovers, broccoli salad, pasta salad, fruit salad, cucumber sandwiches, peach cobbler, banana pudding, a decorate your own cupcake bar, nuts, mints, and of course, tea and lemonade. The hands-down winner of the night was the peach cobbler. (Thank you, Paula Deen, for sharing your amazing recipe!)

It was supposed to be held in my boyfriend's backyard, but the potential for rain and a busted water main forced another last minute venue change. It broke my heart that we couldn't have the tea party in his beautiful garden, which is currently in full bloom, but it was lovely where we had it, too. The bridesmaid's all pitched in and made this a very special day for the bride. My daughter is very lucky to have such amazing friends.

It was a very nice shower.  Most all of the guests were all dressed in pretty summer dresses and flowery hats, the games were fun and silly, the food was plenty, and the bride received a lot of nice gifts. I didn't get take as many pictures as I should have, but I'm in the process of trying to gather photograph's from everyone, but here are a few: 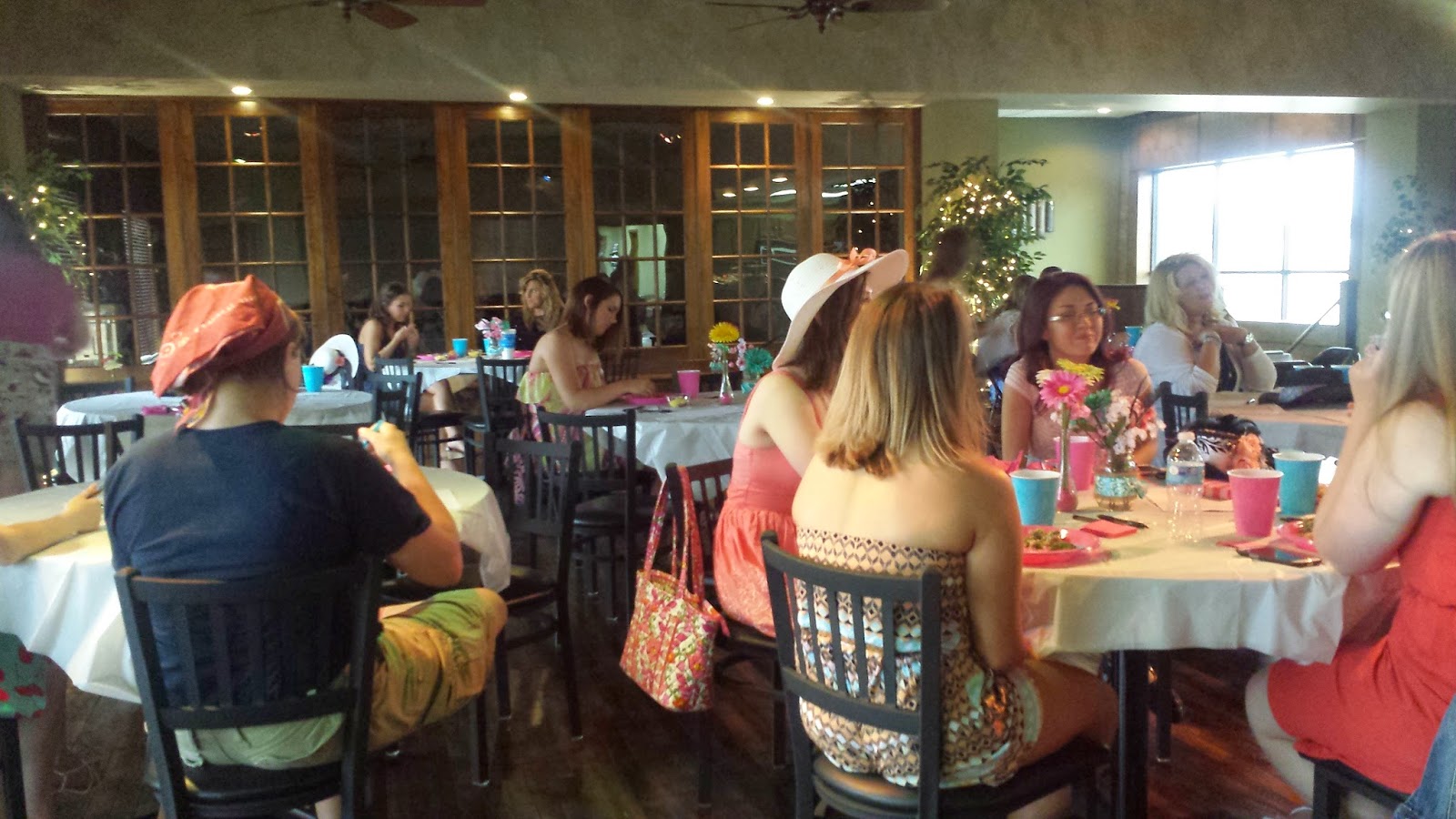 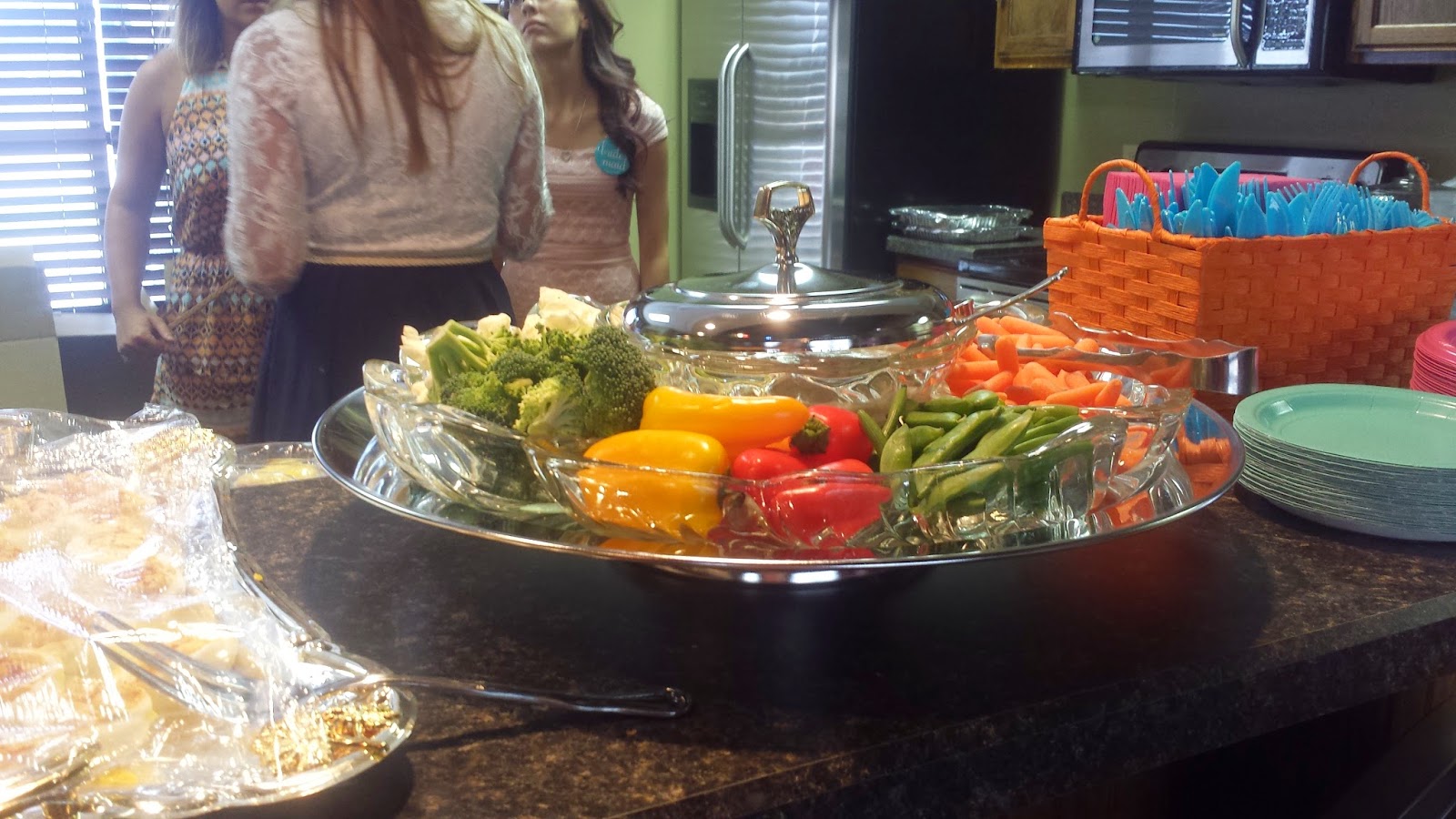 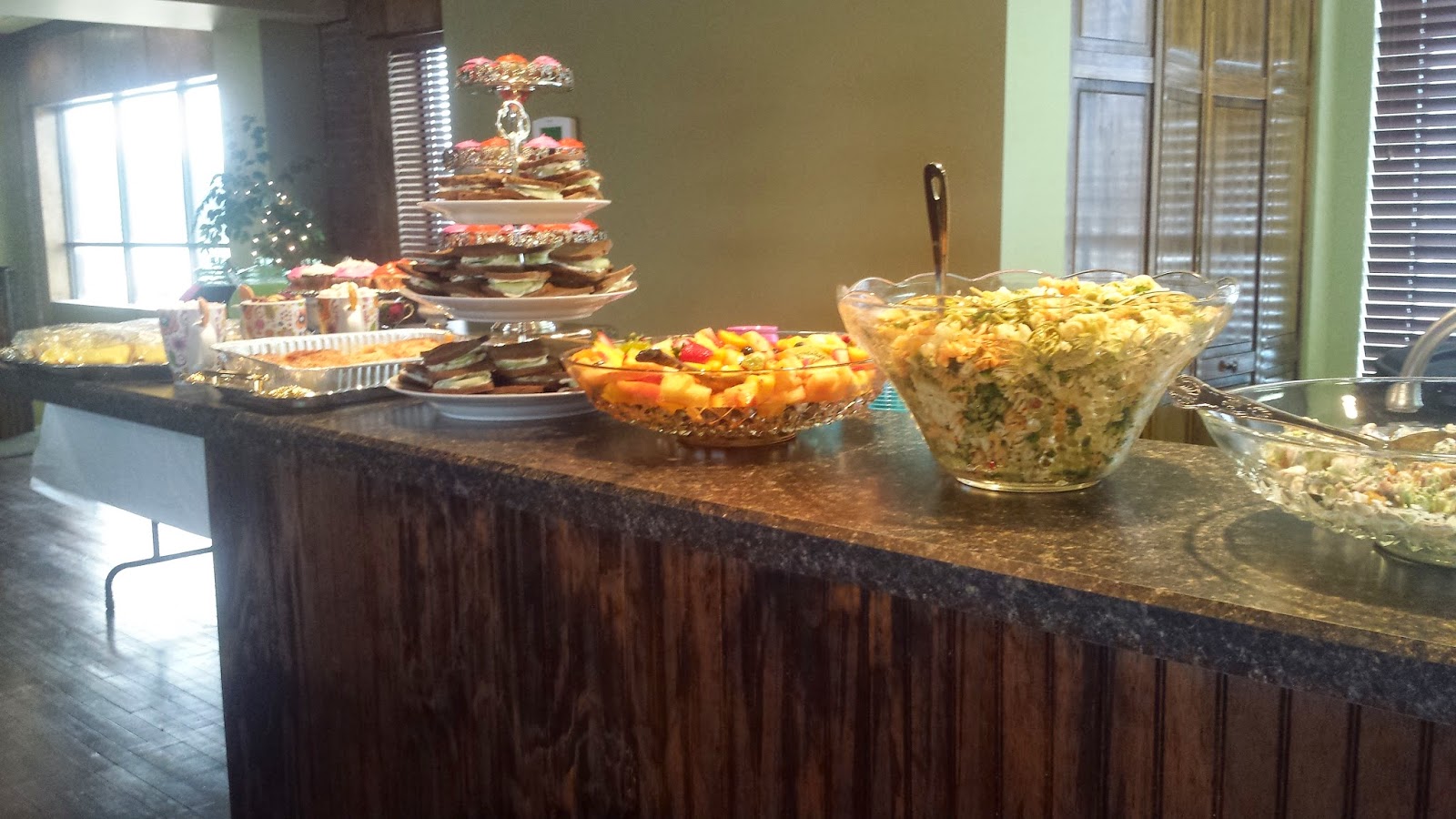 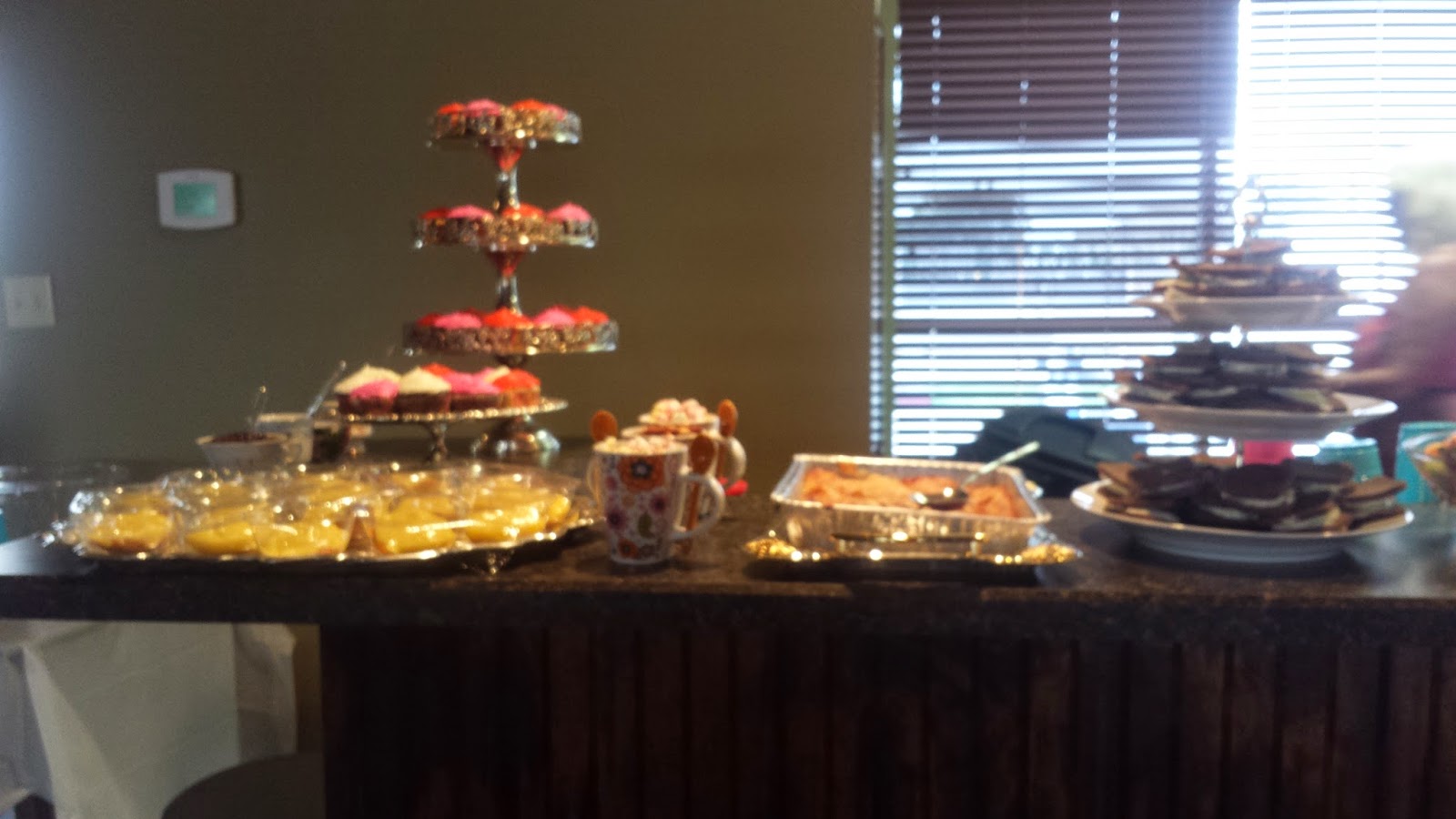 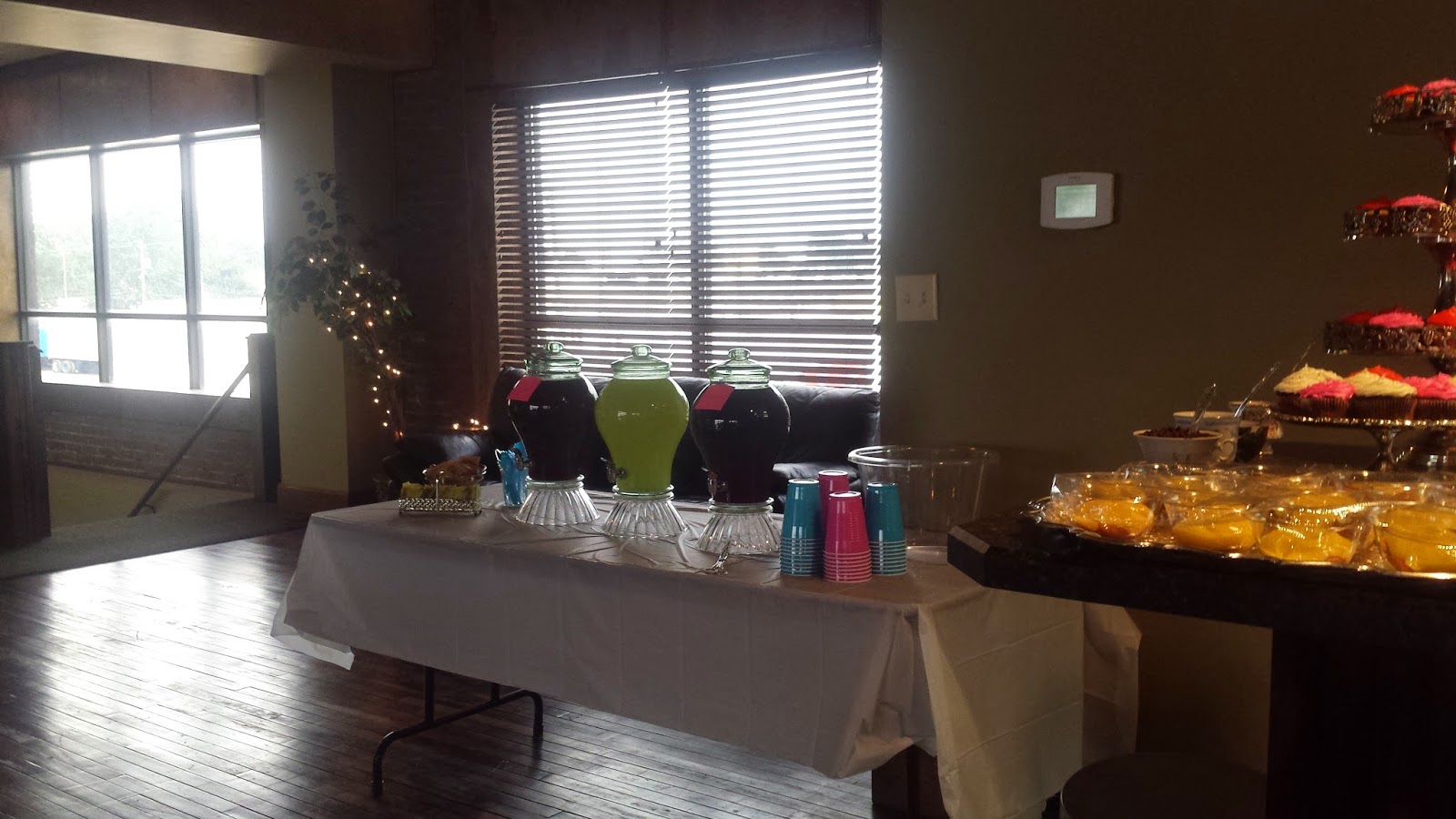