Rex Must Be Ashamed of His Destroyed Legacy 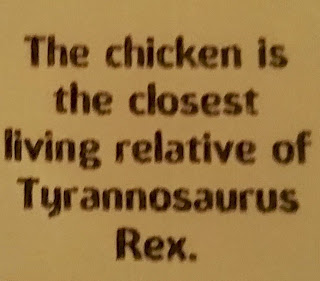 There's a slight physical resemblance, but that's about it. A chicken being the direct descendant of the feared Tyrannosaurus Rex is akin to a mob boss's son becoming a preacher! Neither of them have arms long enough to make a bed ... the chicken and the Tyrannosaurus Rex, that is, not the mob boss or the preacher ... but at least the chicken has evolved enough to be able to get food from a corner! Shrinking the giant head, Ms. Chicken, was a good call!

Posted by Jackie Coleman - Author at 9:07 AM