School supplies are always cheapest in late summer when stores buy them by the truckload, so every summer I would stock up on the things I knew the kids were going to use up or lose ... particularly loose-leaf paper and notebooks. When my son entered his "paper airplane phase", there was an endless supply of material from which to create his fleet.

And create he did.

There were paper airplanes everywhere. They were under, on top of, and behind every piece of furniture. They were stuck in light fixtures and ceiling fans. They were on top of the hutch, refrigerator, and cabinets. For months, before I could vacuum or dust, I had to pick up handful after handful of paper airplanes ... and I got really sick of it.

I don't have anything against paper airplanes, and I didn't care if he made them ... as long as he picked them up! But he never did. Finally, in exasperation, I told him if he didn't pick up his airplanes after he was done playing with them, he wouldn't be allowed to make them anymore. He called my bluff ... hence ... paper airplanes were forever banned and he was grounded every time he made them. He's still complaining about it!

I'm really hoping my son doesn't read my blog today, because he'll feel obligated to make "one" more paper airplane to sail in celebration. And before you know it, paper airplanes will once again overrun my house ... and I'll have to ground him ... again.

If that happens, he'll have a story to tell his future kids when they complain about how mean he is!

For those of you not (yet) banned from making them, here's how to make a really cool paper airplane ... 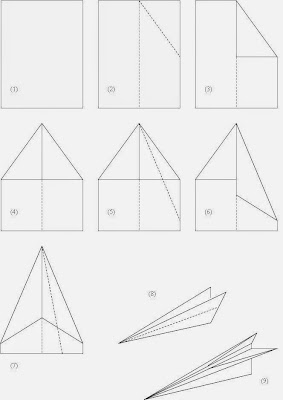