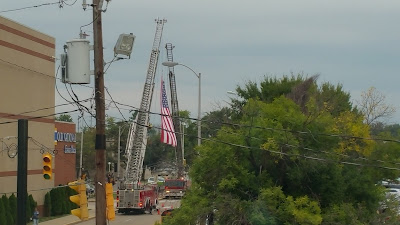 The funeral for a beloved police detective was held yesterday, not far from my office. I heard the cadence drums and got up to see what was going on. I stood at the window watching a seemingly endless procession of people walking from Locust Street into the Civic Center parking lot (pictured above), passing under an American flag suspended over the intersection by two ladder trucks. At first I assumed it was a tribute to those lost on 9/11, but then I realized it was the mourners who had gathered for the funeral.

A few hours later I left the office and turned onto Walnut. The firetrucks that had been used to honor the policeman had moved to a different intersection, in what I assume, this time, really was a tribute to 9/11 (pictured below). Even if it is to mark a horrific event in our nation's history, I love the way it makes me feel when I see a huge American flag dancing in the breeze. 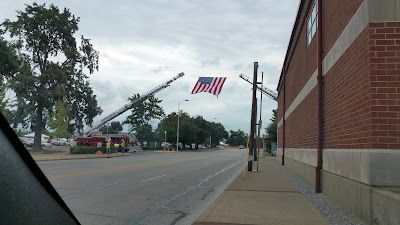 Posted by Jackie Coleman - Author at 9:33 AM