My Son Complained We Had No Bread

My son called me at work, fussing because we hadn't had any bread when he made his lunch before work (what kind of mother am I?!), so he'd had to bring something else instead. His tone implied I wasn't living up to my end of the bargain on the mom/grocery thing, and that this rookie mistake would likely disqualify me from "2015 Mother of the Year". (Let's face it, though, I was probably knocked out of contention before the end of January!) I told him to quit complaining. He apologized, so I said I'd stop and get some bread on the way home, which I did. I also picked up a couple of gallons of milk (both white and chocolate), fruit, lunch meat, cheese, Miracle Whip, chips, drinks, etc.. When I got home, I opened the cupboard to put away the two loaves of bread I had just purchased, and saw this ... 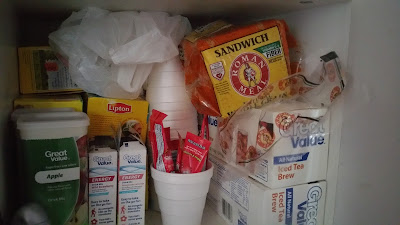 Clearly, we had bread ... over half a loaf to be exact. I had probably seen it sitting on the table the night before and put it away. I say that because the other people who live here rarely bother to put anything away. If something was put away ... were it's supposed to go, it was ... in all probability ... me! Since it wasn't in his immediate line of sight when he got ready to pack his lunch, it (obviously) didn't exist. I took the above picture and texted it to him. Mom's can play passive/aggressive, too!

I realize mom's have an almost superhuman ability to find hopelessly lost items, but this wasn't "hiding in plain sight" ... it was the first thing he would have seen had he bothered to open the pantry door! Even a jellyfish is smart could have found the bread! 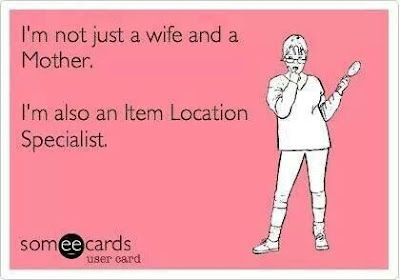