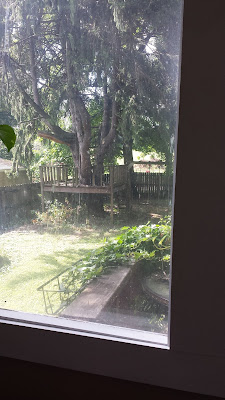 On the way to close on my new house last Friday, I thought about driving by the new one. It was almost on the way to the bank, but I decided against it. The people I have been working with to buy it is the daughter of the couple who built the house in 1957. (Her father passed away about a year ago. I'm not sure when her mother passed.) She and her brothers inherited the house, their childhood home.

I had a feeling the woman would be at the house, saying good-bye, and I didn't want to intrude. When she got to the bank, she told me she had went by the house and had a good cry ... so I'm really glad I hadn't driven by. I completely understand her desire to see the house one more time and say good-bye to it.

After my father died, my mom moved out of the home they had purchased right after it was built. They'd lived in the home for 35 years. Out of eight children, five of them came home from the hospital to that house. As the family grew, so did the home. What began as a modest three bedroom, one bath house eventually became a five bedroom home, with an added dining room, familiy room, and two car garage. Oddly, they never thought about adding another bathroom. I say oddly because my dad had six daughters and a wife ... that's seven girls to funnel through one bathroom, not to mention the two boys and my dad! Poor Daddy had to get up in the wee hours of the morning to get his bathroom time.

Anyway, after Daddy died, Mama moved and the house sat empty for well over a year before she began getting it ready to sell. My mom didn't need all of the furniture in the house, so even though the house was vacant, it wasn't empty. I would periodically wander through the rooms, memories running through my mind of Christmas's and family dinners (my mom was a great cook).

Every room was filled with memories. I smiled as I remembered the time I was playing "Let's Make a Deal" by myself in the dining room. The game I was playing was to guess the prices on various items to win a prize. I had various items displayed on the piano bench, but I could see the price of the food coloring. I kept picking up the piano bench and moving it further and further away so that I couldn't read the price. I'm not sure why I thought it mattered ... it was my game and I was the only one playing. I was going to win anyway! But, I decided seeing the price wasn't fair. I picked up the piano bench to move it again and got my finger caught in the hinge. Long story short, my right index fingertip was split to the bone and I needed stitches.

When we returned from the doctor, I was walking through the living room, holding my finger up to keep the blood from flooding it and making it throb. My mom was sitting on the sofa and said "Don't fall down the steps and hit your finger on the pool table."

I thought that was a strange thing to say. She didn't know where I was going! I could be going anywhere! Why did she assume I was going to the family room? Aside from that, I was around eight years old or so at the time, and I had never fallen down the two steps off the dining room into the family room. Why would she think I'd fall this time? I gave my mother a strange look and continued walking through the living room into the kitchen, through the dining room, then down the two steps into the family room ... where I promptly fell and hit my finger on the pool table!!

Turns out, Mama was right ... on both counts! I was heading to the family room and I did trip and fall, hitting my finger on the pool table! I would come to realize that when she offered me advice throughout the years, she was right those times, too ... except when OJ Simpson killed his ex-wife and a man who happened to be at the wrong place at a very wrong time. Mama said she didn't think OJ would be stupid enough to leave behind that kind of mess. I told her someone was stupid enough to leave behind that kind of mess, and besides ... it was his first double homicide ... I told her I was sure he'd be more careful next time! For the most part, my mom was a good judge of character, but she had a tendency to only see the good in people.

As I wandered through the house, I realized I kept returning over and over and over and over, looking for something of "Daddy" that I could keep, but I always left empty-handed. Still, I kept returning, looking for a memento of my father's life. I remembered one time feeling particularly discouraged that I could find something of Daddy ... and then it hit me ... Mama was all the stuff inside the house ... Daddy was the house itself. There was nothing inside the house that I could take and hold and feel a connection to my father. Daddy was the provider and protector. I left that day with a heavy heart. When the house finally sold, I lost the last tangible connection to my father.

Before I closed on my new house, I had only met the woman selling the home a couple of times, but she gave me the impression that she loved the home, missed her parents, and in her heart of hearts, didn't really want to sell the house. I hadn't wanted my mother to sell my childhood home, either, but what was the alternative? Letting the house sit empty and watching it fall into disrepair just so that I could come back and reminisce was silly. I knew that. But still ... watching my mom sell the house was painful.

Tonight I will sleep in the only home my kid's really remember for the very last time. Fortunately, it won't be the last time I'll get to celebrate Christmas or enjoy noisy family dinner's there, but when I return it will be as a guest, not the owner. I won't be able to just walk in the front door ... I'll have to knock. But, that's okay. Selling the house to my daughter and son-in-law was a lot less emotional than selling it to strangers. Leaving tomorrow "for good" isn't really good-bye ... it's more like "See you later", and I can deal with that. We would all be a blubbering mess if we had to say good-bye forever to this beautiful, old Victorian.