The good news is that I found two (red) Step 2 chairs for the babies to use at their table. When I bought that table for my kids, it came with two chairs, but I only found one when I needed to use it for my grandbabies. I've been on the lookout for two more chairs that didn't cost an arm and a leg and I found them .... in Harrisburg, IL. After work yesterday, a friend and I drove to Harrisburg to pick them up. 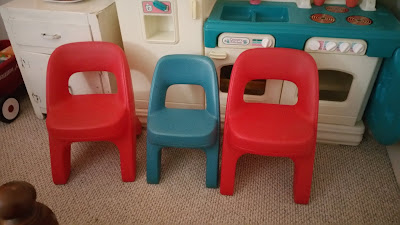 After picking them up, the woman said, "Be careful driving home, and watch out for deer." We assured her we would. I started towards home with the Happy Song by Pharrell Williams playing in my head, absolutely giddy to have those silly chairs in my possession!

We had driven less than a mile when a deer darted out into the road. I sped up so that I wouldn't hit it ... and I didn't ... but it did hit me! I saw the deer attempting to stand, but it was dark, so I don't know if it was just stunned or really hurt. I hope it was just stunned.

I pulled over as soon as I could to inspect the damage. It wasn't too bad, but it did leave a big dent on the side, all the way in the back by the taillight. With a vehicle as old as mine, though, a big dent may be enough to total it! 😄 I took a picture of it when I got home. It's not a good picture of the dent, but it's the best I could get with the lighting in the garage.

Now my worry is that the deer who hang around outside my window will get wind of what I did and label me "The Deer Killer" ... that they'll whisper "She's the one we've been hearing about" to each other as they walk by my house, and then they won't want to hang around me anymore 😕 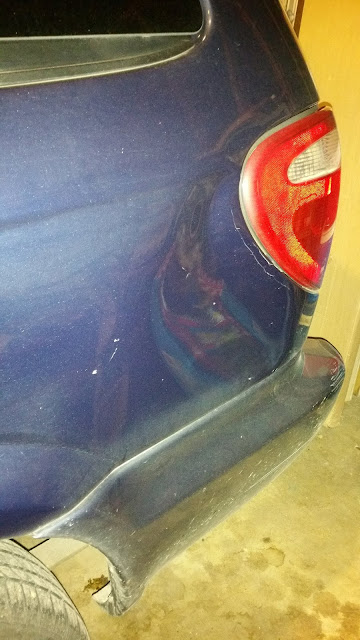 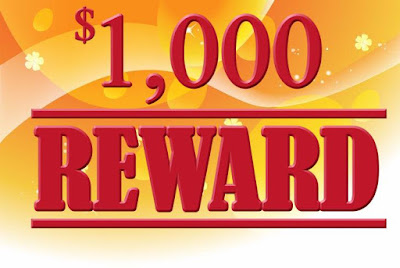 If you know of a vehicle matching this description, please contact the Sheriff's Office TIP line at 812-421-6297 or leave a web tip here.
Posted by Jackie Coleman - Author at 6:07 AM