I had a very nice birthday

In addition to my desk (see it here), I got: 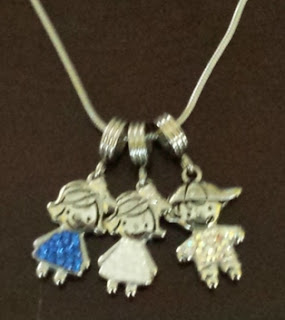 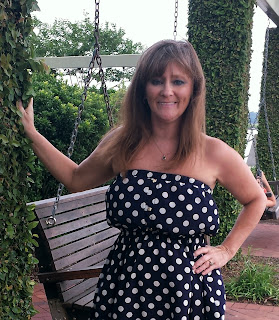 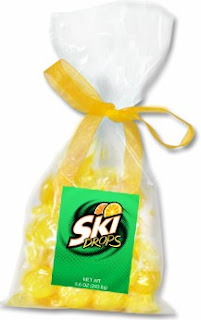 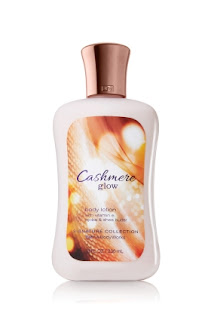 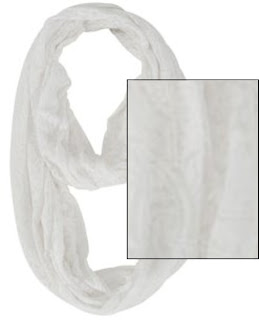 a framed picture of my daughters and I on vacation (wearing my birthday dress!) ... 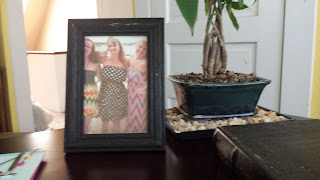 a very pretty umbrella (forgot to add this in my initial posting!) ... 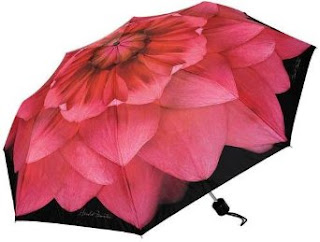 several birthday signs:
at home (in the craft room) ...

I received this in a text from a very sweet friend ... 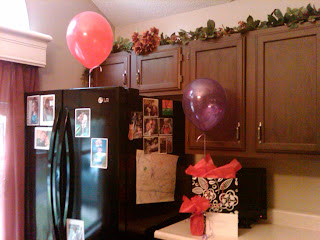 From my sweet, little nephew ... 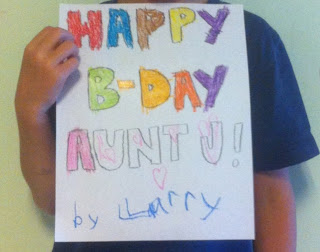 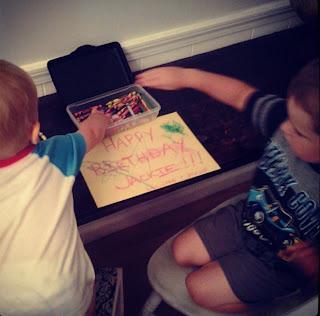 Dinner at the restaurant of my choice, flowers, homemade lemon-spinach dip and flavored chips (both yummy!!). It seems to me I'm forgetting some, but that's most of them! All in all, I had a very nice birthday!!!
Posted by Jackie Coleman - Author at 3:57 PM 1 comment:

My daughter fixed hamburger helper and mashed potatoes for lunch the other day. I was at work, so I didn't get to partake in the feast. But, she fixed me a container to take to work for lunch the next day.

Here's what greeted me when I came home and opened the refrigerator ...

Isn't this a cool plant?!!!
(click on image to enlarge) 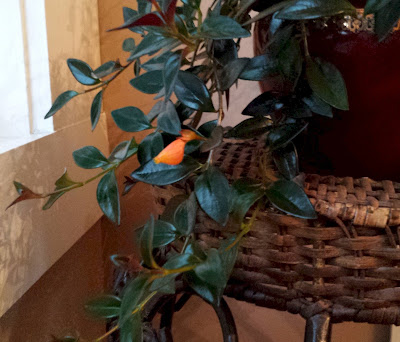 I pinned a dress on Pinterest that I liked. Well, I liked it on the young model. I really didn't think I'd be able to pull it off, but that didn't stop me from pinning that very pretty dress to one of my boards. Then, out of the blue ... my sweet daughter found it in a store while shopping for herself ... and bought it for me! The young model definitely wore it better, but I didn't look nearly as dreadful as I feared! (Click here see the dress).

The past few months I've been surfing the web looking for a larger desk. The ones I could afford were too small. Most of the ones I really wanted were way too expensive, but it didn't stop me from repeatedly surfing to their pages and admiring them from afar. And then I got one of the very desks I'd been salivating over for my birthday! (Click here to see the desk).

If you need me, I'll be on the computer ... looking at pictures of money, beautiful homes, and publishing contracts :)
Posted by Jackie Coleman - Author at 2:35 PM No comments:

At this point, I had a real internal struggle going on. The mature woman inside me said, "No, wait until your birthday." But the four year old in me wanted to scream, "Yes, please!"  I needed more information before I could answer that question, so I asked for a clue. He told me I was getting an Uncle Wiggily Game.

I'm guessing you're scratching your head about now. Allow me to elaborate ...

I am one of eight children. There were four kids, a six year break, then four more. I was one of the younger four ... forever known as "the four little kids". Us four little kids were close in age, so we all got presents on each other's birthday. One year on my birthday, I told one of my little sisters that I'd tell her what she was getting if she told me what I was getting. I knew she wouldn't tell me, and I had no idea what she was getting, so I couldn't have held up my end of the bargain anyway. Instead of saying, "No", my little sister said "You're getting an Uncle Wiggily Game."

I immediately burst into tears. She wasn't really supposed to tell me!!!

So, it's a running joke in my family ... if someone asks you what they're getting or for a clue ... the standard reply is, "It's an Uncle Wiggily game."

I knew I would love whatever he bought, just as surely as I knew did not buy me an Uncle Wiggily Game. He's exceptionally good at picking out the perfect present for me. Unlike a lot of men, he actually listens when I talk (most of the time anyway!). He knows the things I want because he hears me talk about them, or he sees me admiring them in stores. The words "What were you thinking?" have never crossed my mind when he's given me a gift.  Not even once.

Our second Christmas together, he bought me a toy I wanted as a child and never got (Click here to read a very informative blog posting about it.) One of my little sister's got it instead, and I was heartbroken. It was just one of those silly childhood stories you tell that provides concrete evidence of how mistreated you were as a child ... and that your parents did indeed love your sibling(s) more than they loved you. Anyway, I told him the story and figured that was that. Until I opened my Christmas presents that year ...

And there it was ... the one toy I desperately wanted and never received. How sweet is that?!!

I really wanted to scream, "YES! YES! YES!  I WANT MY PRESENT EARLY!!", but decided to be a grown-up and just wait. I think he wanted me to say yes, because not too much later, he said "You can have your present tonight. You may as well be using it."

He obviously wanted me to have it early, and I certainly didn't want to hurt his feelings ... so I agreed he could give me my birthday present early. He led me to the garage ... and there it was ...  A NEW DESK! And not just any new desk, it was one I was actually drooling over online! He knew I wanted a new desk, but he didn't know I wanted that particular desk.  I never told anyone I wanted that desk, and he doesn't have access to my computer, so it's not like he scoured my browsing history to acquire this knowledge! The only way for him to know I wanted that exact desk was for him to know what's in my heart ... and he does. I feel very, very, VERY lucky to get to walk through life with him by my side :) 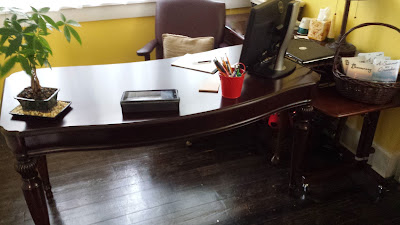 P.S. He bought me the chair a few weeks ago ... and he also gave me the bamboo plant on the desk. He sent the plant to me at work to congratulate me on making the Quarter Finals in the Amazon contest. Sometimes I have to pinch myself to believe he's real, that I'm not just dreaming him up :)
Posted by Jackie Coleman - Author at 2:35 PM No comments: 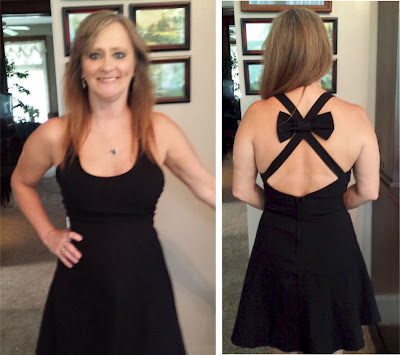