For those of you who have never been to Ocracoke ... or have never even heard of it ... you truly do not know what you are missing. I fell in love with Ocracoke on the ferry ride over. The anticipation rose as I drove the fifteen miles from the ferry terminal to the village, the waters of the Pamilico Sound on one side, and the wide expanse of the Atlantic on the other. By the time I reached the village, I knew Ocracoke would be one of my favorite places on earth.

There are no McDonald's and no Walmarts. There are no big shopping malls, or even strip malls. In fact, there are no franchises of any kind. Instead, the shops and restaurants dotting the village are pretty much owned and operated by the people who call Ocracoke home. The shops all offer unique items, many by local artisans, and the restaurants serve some of the best food you'll ever eat! Vacationing on Ocracoke is like going back in time, except you still have all the amenities of modern-life. My time on Ocracoke has always been the most relaxing, most thoroughly enjoyable days of my life. It doesn't appear I'll be able to go to Ocracoke again this year ... but there is always next year! 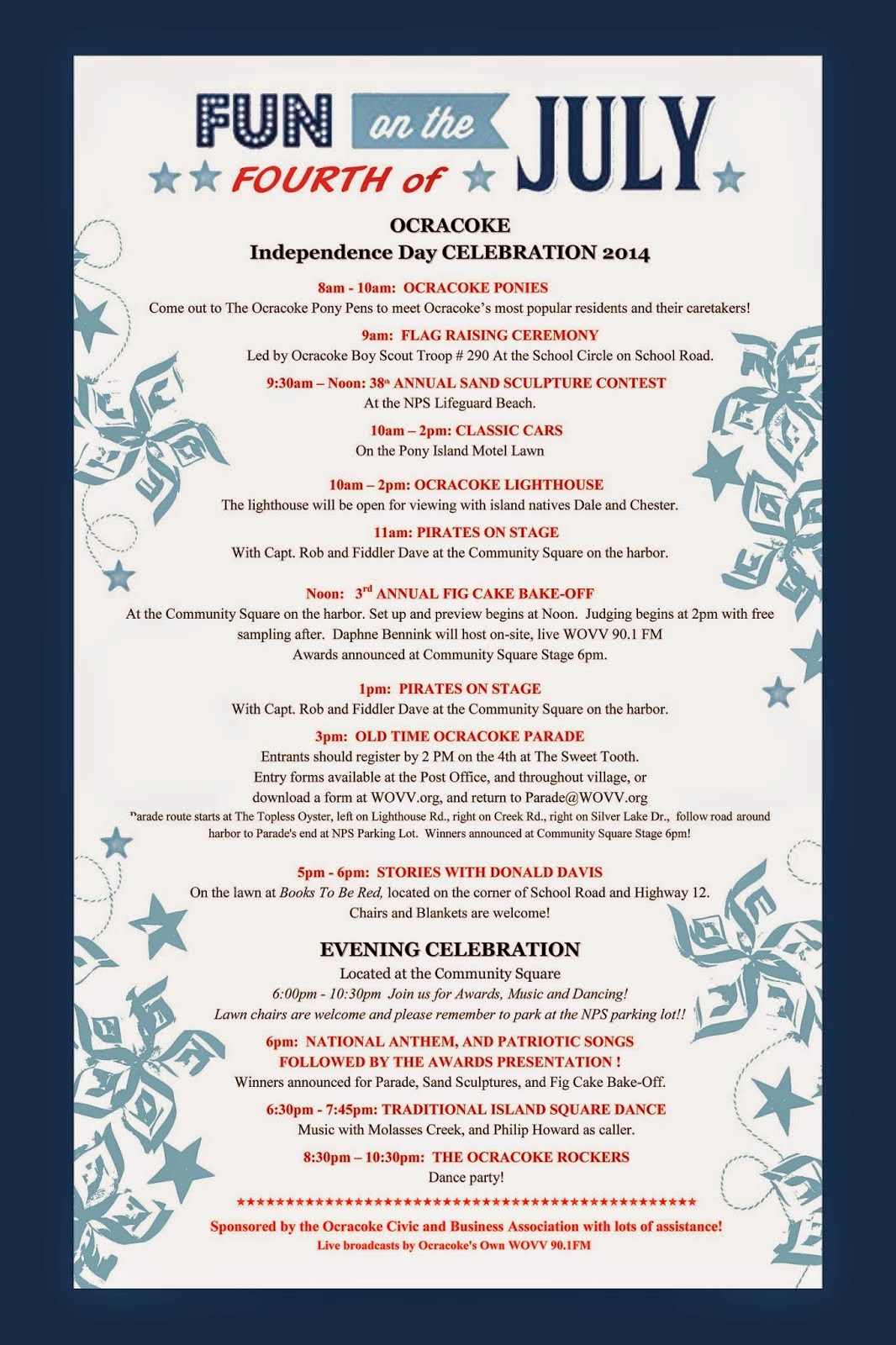 And now, Hurricane Arthur, currently a category one, is heading for the Outer Banks of North Carolina. Unlike the other islands of the Outer Banks, the only way on or off Ocracoke is by ferry, boat, or private plane. Since the ferries cannot operate once winds reach gale force strength, it's usually the first island evacuated, so I was surprised to hear that there is a mandatory evacuation for Hatteras Island (just north of Ocracoke), and a voluntary evacuation order for Ocracoke. Hatteras Island does stick out further into the Atlantic, but not by much! The hurricane authorities tend to err on the side of caution, so they must feel pretty secure in the knowledge that Ocracoke will be relatively safe ... and that's very good news! The storm is schedule to hit on the 4th, so all of the 4th of July festivities scheduled on Ocracoke have been moved to Saturday the 5th.

In 2009, a truck loaded with fireworks exploded on Ocracoke, killing four and injuring one. After the tragedy, Ocracoke no longer has a fireworks display, but they do have a full day of activities planned ... the good, old-fashioned kind of fun you'd expect from a close-knit community.

My thoughts and prayers are with the people of Ocracoke and Hatteras, and all the other communities along the Outer Banks. I hope the damage is minimal and they are able to enjoy what's left of the holiday weekend after Arthur sweeps by. Even with rain and hurricane-force winds, I think a bad day on Ocracoke is better than a good day most anyplace else!
Posted by Jackie Coleman - Author at 8:37 AM