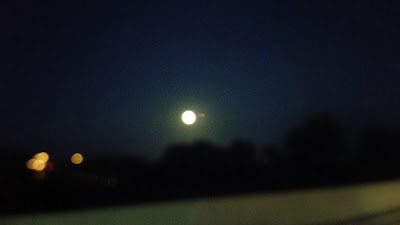 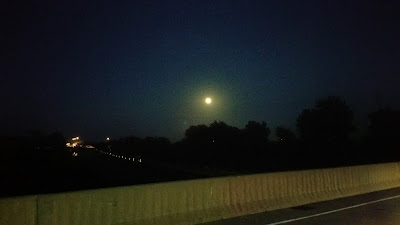 Whenever I hear the phrase "Blue Moon", I think of a Gilligan's Island episode when Ginger was a psychic. I can't remember if she got hit on the head with a coconut and thought she was a psychic or if Gilligan got hit on the head with a coconut and Ginger pretended to be a psychic. Anyway, she told the gang a ship would come near enough to the island to rescue them "when the moon is blue." Somehow, Ginger's cover was blown and they all figured out she wasn't really a psychic. They all turned in for the night, without lighting a rescue fire or looking towards the ocean ... as Blue Moon lit the horizon ... illuminating a ship close enough to rescue them had they lit their fire. I guess it goes without saying that it was a real tear-jerker!

Coming home from dinner last night I snapped a few pictures of the 2014 Blue Moon. Sadly, none of them will win me the Pulitzer Prize ... or even a congratulatory "Hey, Jackie ... great moon pics!" Fortunately, when I snapped them on my phone, I didn't expect Annie Leibovitz quality photographs ... nor was I surprised when didn't I get them!
Posted by Jackie Coleman - Author at 7:35 AM