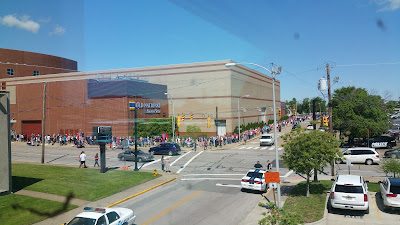 The rally was held at the Events Plaza across the street from our offices. If you click on the above picture to enlarge it, you can see the line that has wound around from the front of the building, and wrapped completely around, then down two blocks and wrapped around the next corner. The Events Center said 9,000 tickets were given away. At least that many more were unable to get inside.

One person walked around all day wearing all black, including a black mast, with a black messenger bag on his shoulder, carrying a bouquet of white roses, and an anarchy flag. The police and secret services watched him very carefully, as well they should. I'm not sure what message he was trying to send unless it was "I'm at idiot". If that was what he intended to portray, then good job! 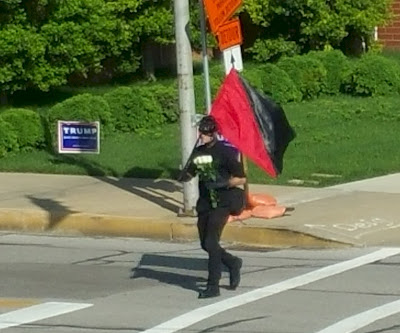 There was also a really cool Humvee circling around. The crowd cheered every time it drove by. 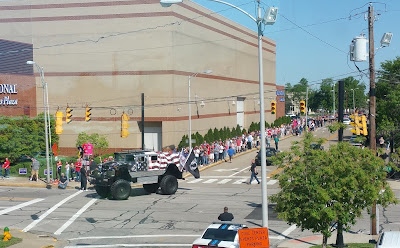 With all the commotion going on right outside our windows, we all found it very difficult to work. We tried, but we all kept gravitating to the windows to people watch. I videotaped the motorcade as Trump arrived and left, but they went by so quickly that's it's not worth posting. It was a very interesting day.