If These Cupcakes Were on Cupcake Wars 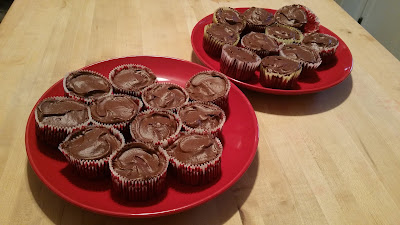 Florian Belanger would have plenty to say. They're red velvet, which he loathes ... and they didn't rise. Although the cake was tasty, he would have plenty of unkind things to say about it. I envision words "dense" and "hockey puck" being used, and ending with his trademark, thickly accented, "This cupcake doesn't work for me". But, he would also say the chocolate buttercream was divine! It was the best icing I've ever made ... chocolaty, not too sweet, and creamy smooth. However, unless someone made a bigger mistake than me, I would be done in Cupcake Wars.
Posted by Jackie Coleman - Author at 7:43 AM