But it still made my heart stop! 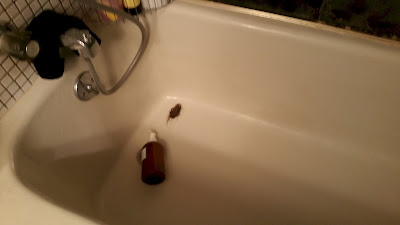 There is an ongoing war between Thing 2 and Thing 3. Thing 2 claims Thing 3 leaves his hair in the sink after he shaves. Thing 3 says Thing 2 leaves her hair in the bathtub after a shower. I shared a bathroom with those kids for many, many years, and both of those statements are true. They're getting better about cleaning up after themselves, but they aren't completely healed. I'm not sure if they do it in retaliation or laziness. I suspect it's mostly laziness ... with a smirk-inducing side of revenge. They are easily able to turn a blind eye the messes they make ... while loudly complaining about the messes the other made.

I went into the kid's bathroom the other day after work. The shower curtain was open, which drives me nuts. As I was pulling it closed, I spied what I thought was a mouse in the bathtub and froze. I turned on the light, moving as slowly as possible, while contemplating how I was going to trap that thing. Several questions ran through my mind: Is the bottom of the tub was flat enough to trap a mouse underneath a bowl? Can mice climb up the slick side of a bathtub? And, most importantly, what are the odds that filthy thing could somehow reach ME as I tried to trap it???

Fortunately, I never had to find out! Once the light was on, I leaned a little closer and realized it was a hair wad. [Insert BIG sigh of relief here!] Thing 2 might be an adult now, but she came this close to being grounded!! [Insert a mental imagine my thumb and pointer finger very close together here!] 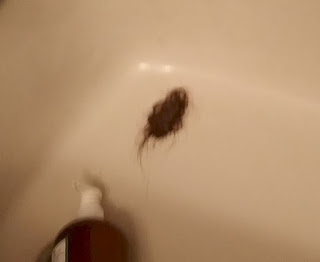 Posted by Jackie Coleman - Author at 6:07 AM