On this day in 2001, I was sitting in church, listening to Pastor David preach, when someone walked up to the pulpit and whispered something in his ear. After the exchange, Pastor David picked up right where he left off. I couldn't help but wonder what was said. What was so important it had to be relayed during a sermon? At the end of the service, he explained that he had been told that the United States had just began military action in Afghanistan.

For some reason, Thing 3 was the only one of my kids with me that day. As we were driving home, I was listening to the news, something a seven year old considers the worst kind of torture. I told him we were at war with Afghanistan and I wanted to see if I could find out more of what was going on.

He fell silent for a while, then finally asked, in a soft, solemn voice ... "When will they get here?"

Until that moment, I never gave much thought as to what my kids thought when I was watching the news. They would see refugees walking down dirt roads, pulling carts or pushing wheelbarrows filled with everything they could escape with. To them, that was what "war" meant. Shame on me for assuming they knew it was in a land far, far away, and that they were safe.

So when my innocent little boy asked, "When will they get here?", he was really asking, "How long before the bombs drive us from our home? How long before we are forced to walk down the road in a river of frightened, ragged people, taking only what we can carry?" 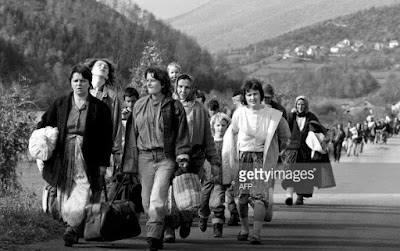 I should have known better. As a child, I could never understand why Daddy wouldn't take us kids to see the Macy's Parade. He kept saying it was too far away and that it would be over by the time we got there, but the commentators said it was downtown! We had been to see a lot of parades downtown. It wasn't that far! I had no concept of how far away we were from New York City. Adults understand the geography of the world, and we take for granted that children understand, too ... but they don't. A child has no idea how big the world is because their world is really very small.

I immediately turned off the radio and explained that Afghanistan was a long, long way away. We talked a little, then I turned on some music. But, when we got home, I took him over to the globe and pointed out where we were. Then I pointed out where Afghanistan is and how long it would take to fly there in an airplane. That eased his mind, and he wandered off to play.

And it taught me a very important lesson.

I was reminded of how differently children processed the images on the news. I started watching the news in my bedroom or I'd turn the channel and let them decide what to watch. And, I'd pick my words much more carefully when they asked questions about war and terrorism.

On that day in 2001, I never imagined that by 2016, our current inept President would handle the crisis in such a way as to create a vacuum which would give rise to ISIS, threatening not only the Middle East, but the entire world.