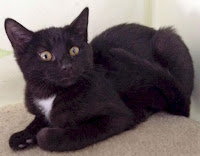 I'm giving serious consideration to coloring the cat again ... and blaming it on my son.
Posted by Jackie Coleman - Author at 12:23 PM