"It's always something. If it's not one thing, it's another."

Years ago, the state planted ivy for erosion control on the hill on one side of my property. When I moved here, the ivy had was in various stages of growing up all of the trees in my woods, and it had killed several. I spent two summers pulling ivy off the trees, some with roots as big as a tree. I used a chainsaw, hacksaw, or clippers to pull what I could off the government trees that I could reach from my side of the fence.

I also cut down some of the small trees on their side that were growing close to the fence. The woods on the government side is pretty thick, and ALL of their leaves fall in my backyard. I must have a very hospitable yard, because once they leaves came to my yard, they were quite content to stay. (They liked the yard at my last house, too.)  Cutting down those small trees solved two very small problems ... they won't grow to be large trees with truckloads of leaves that would have undoubtedly fell in my yard and they won't get to be giant trees covered in ivy, ready to fall on my house.

There are some huge trees over there completely covered in ivy too far away to reach. There is also tons of poison ivy, oak, and sumac over there. To me, that's the boogie man!

Last summer a sizable branch broke off one of the government trees and fell in my yard. I had just finished cutting down small maples and scruffy pine trees with a chainsaw, so I just cut up the government tree and burned the bug-infested wood in my outdoor fireplace. There was nothing planted where it fell, so all it cost me was time and energy. No biggie. 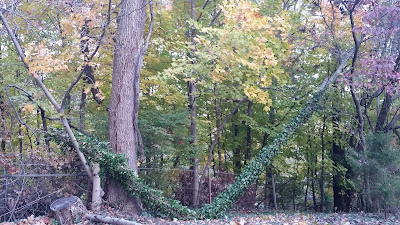 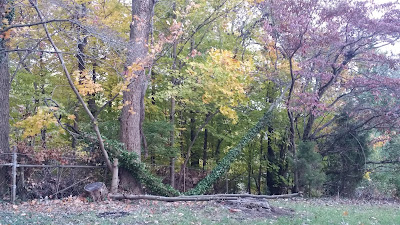 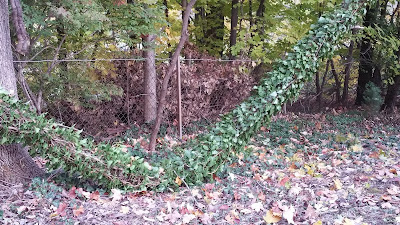 A few nights ago, the top of that same tree fell. The only reason I saw it when I did was because I couldn't connect to the internet the night before, and I had to run home to wait for my ISP.

My heart stopped when I pulled into the drive. ... I thought it had crushed Davy's dogwood! I ran to the tree, literally fighting back tears. I can't tell you how relieved to see it had not landed on it, but it was leaning against it, forcing Davy's tree to an odd angle.

My neighbor from across the street saw me, totally unsuccessfully, try to move the fallen tree away from Davy's. He stopped and rolled it off. I was SO grateful. 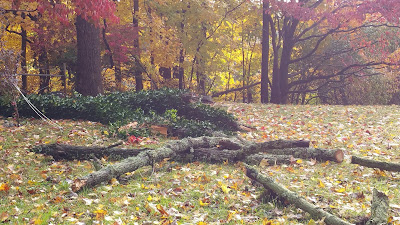 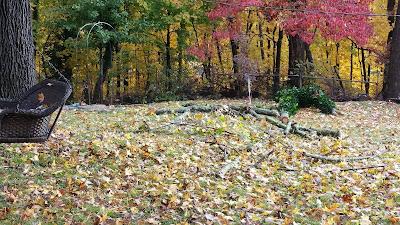 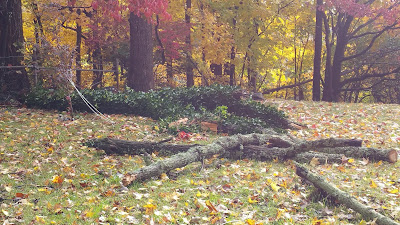 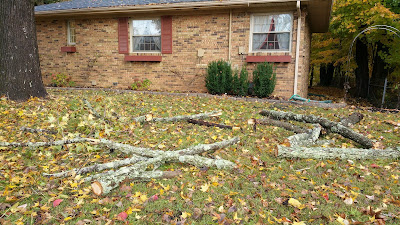 When the limb fell, it hit the power line coming into my house, but I didn't lose power. It did, however, make the utility pole across the street lean, and pulled the electrical lines off of my neighbors. I didn't lose power, but it did bend the weatherhead on the house. I was told it might be able to be bent back, but I would need an electrician to look at it.

My sweet brother-in-law came over and looked at it. He said the pipe is 2-1/2" steel, and he couldn't bend it back by himself. His biggest concern was that it being bent like that was exposing my flashing. He was concerned that it would damage my ceiling if it rained. I was concerned about that, too, but I was just as concerned that the hole was big enough for a squirrel to get in! He ran to get what he needed to wrap the exposed part while he waited on one of my son-in-laws to come over and help him try to straighten it. 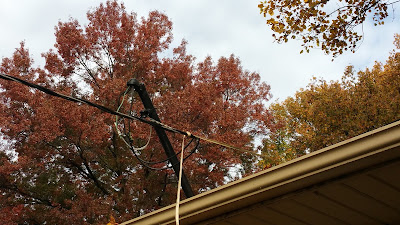 Unfortunately, the pipe broke when they tried to bend it back. My brother-in-law is a licensed electrician in a nuclear power plant, but he's never done this kind of installation, so this is not something he'd be comfortable doing. I appreciate what he did and the fact that he tried to fix the pipe.

Oh, goodie! I get to hire an electrician.

The good news is that they sealed the pipe so that rain and critters can't get in ... but the best news is that Davy's tree is unharmed!!!!!! All I need is a new spike to hold it to where it can grow straight and strong. That, I can easily do.

I still need to cut up the tree, but that's a Sunday job.


If you know of a vehicle matching this description, please contact the Sheriff's Office TIP line at 812-421-6297 or leave a web tip here.
Posted by Jackie Coleman - Author at 7:17 AM