I have seen several deer lounging outside my bedroom windows since I've lived here. There was a time where I didn't see any for a long time, which was unusual, but that drought was broken a day or two after Davy died. Every deer I have seen here was a doe, but today, I saw my first buck. 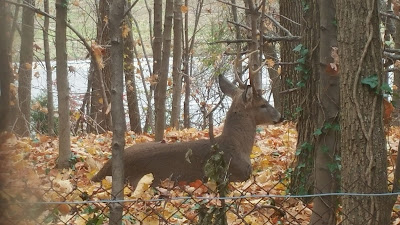 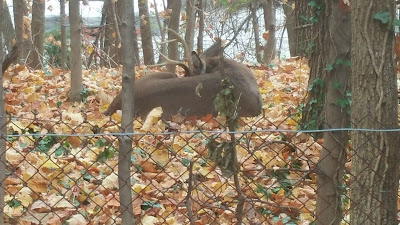 When the kids were living here, I would show them the deer outside my window ... but only if they were awake. If you try to wake them up when they don't have to be awake, they act like a cornered animal! At our old house, we saw plenty of squirrels, raccoons, occasionally a opossum, and on one rare instance, we saw a deer. We had a woods behind the house when we moved in to my old house, but after about six years or so, they cleared the woods. It was to develop something that has never came to fruition, so those gigantic trees were cleared for nothing. It made me sick to see those extraordinarily large trees felled.

I was at home when they took the one directly behind my house. It was big enough that if it had fallen during a storm, it would have taken out not only my house and my next door neighbor's, but also a couple of houses across the street. Three men were standing in front of it about a foot apart, their hands on their hips ... and there was still a foot or two of tree on either side of the outside men.

When they started cutting on it, I walked away. I couldn't watch ... but I knew when it had fallen ... it felt like an earthquake.

Okay, back to the deer. When I opened my drapes this morning, I saw a deer, but I couldn't see it too well from my bedroom window, so I went into my bathroom. That's where I saw it wasn't just a deer, but a buck ... and I also saw a doe that I hadn't seen at all when peering out my bedroom window. 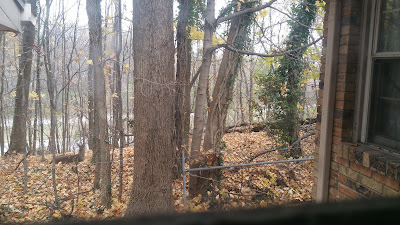 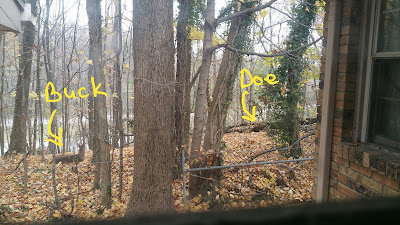 It's silly and untrue, I know, but I like to think the buck is Davy ... that God put that buck there as a way of telling me I can quit mourning so deeply ... that I don't need to cry or walk around on the verge of tears anymore. While I do know my son is gone from earth, I think it will be quite a long time before I don't want to cry all day every day.

Davy was quite the chick magnet. When we'd go swimming, he would go off to play and come back with a harem of girls in less than a half an hour ... so it doesn't surprise me that "Davy" brought a girl with him when he came to visit.

I watched the deer on and off all day as they sat silently, chewing something, or moved around and foraged, eating whatever deer eat in the woods. 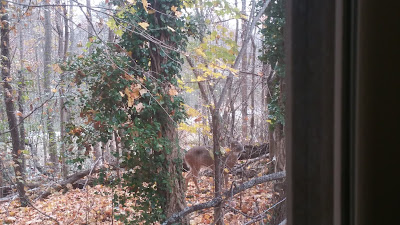 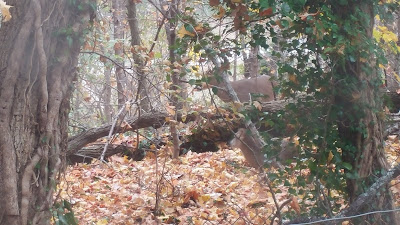 Most days, I don't cry. I want to, but I don't. When I feel the tears starting, I reel them back in. Last Friday, however, that wasn't the case. I was on my way to Thing 2's house to help her fluff-up the branches of her Christmas tree. Yes, you read that right ... that silly girl put her CHRISTMAS tree up on NOVEMBER 8th!

I had some time to kill before she got home, so I sat in my car across the street from where Davy lived when he died. I was listening to "I Will Praise You in This Storm", by Casting Crowns. As soon as I heard the line "I will raise my hands and and praise the God who gives, and takes away" ... I lost it, and the tears I'd been holding in for so long found their way out.


Praise You in This Storm
by Casting Crowns

I was sure by now God you would have reached down
and wiped our tears away,
stepped in and saved the day.
But once again, I say amen
that it's still raining
And as the thunder rolls
I barely hear your whisper through the rain
I'm with you
And as your mercy falls
I raise my hands and praise
the God who gives and takes away

You can listen to the song (with lyrics) here ...

Driving home from Thing 2's house Friday night, I saw a deer run across the road in the distance. When I got to where it had crossed, I looked over, and it was still there ... a majestic buck ... staring right at me. I know it's not, but I'm pretending the buck outside my window as I type is the same one I saw that night.

The girls and I feel lost right now ... like we're floating on the ocean without any means of propulsion ... and even if we had the means to move ... we can't see any land in sight and have no idea which way to go anyway.

Still, I do trust God ... the girls and I all do ... and we know Davy dying so young was somehow part of His plan. We have no idea why His plan involved taking him just shy of his 24th birthday, but it did. Our grief is still raw. Our hearts feel like it's in a vise, and there's a weight on our chest as though someone were sitting on it.

Our lives changed forever in those early morning hours on June 23, 2018 when the Detectives and Coroner stood on his porch, just hours after Davy was killed the night before ... and, as gently as they could, they told us that my only son and my daughter's brother was gone. We will never be the same. His sisters and I will always be acutely aware of Davy's absence, and we will always feel the pain his death brought into our lives.

But we still trust God ... and despite our grief, we will raise our hands and praise the God who gives ... and takes away.

Posted by Jackie Coleman - Author at 9:20 AM