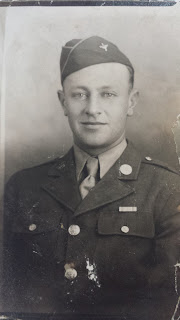 Last year on this date my blog post was about my father crossing the equator on D-Day 1944. (You can read that here.) This year the post isn't really about my father, but all of the World War II vets, and the stories they have to tell.

A friend of mine didn't find out her father was on Omaha Beach on D-Day until after his death. What a shame that he took his stories and accounts of that day to his grave.

My dad never talked much about his time during the war, even after he was diagnosed with terminal cancer ... until one day near the end of his life.

Towards the end of the war, Daddy was stationed in the Philippines. The American GI's sheltered a 12-year old Philippine boy, orphaned by the Japanese during war. It was against regulations, but the men did it anyway. The boy wanted to work for the chocolate and rations he was given, so the American's would have him shine their shoes or do other small tasks. It pleased the boy that he wasn't a charity case, that he was earning his keep and doing his part in the war, and the GI's were happy that this young boy was safe and was no longer hungry or afraid or alone. When they were all loaded up on a ship to head to Japan for a ground invasion, the men had to leave the boy behind. My dad was heartbroken and feared for the boy's future. He never saw the boy again. Memories of the boy and what became of him haunted my father for the rest of his days.

Daddy was an airplane mechanic. As such, he wasn't issued combat boots or a rifle. It was the job of others to protect him while he worked on the planes. When America made the decision to drop the first atomic bomb on Hiroshima, my father was on a ship, heading towards Japan. He had been issued combat boots and a rifle, and would be part of the ground force if Japan didn't surrender. He was still on the ship on August 9, 1945, when the second bomb was dropped. Daddy wrote a letter home that day, and spoke of listening to all the radio broadcasts they could get ... all of which talked about the "new bomb" and the belief that the war would end soon. By the time Daddy arrived in Tokyo, Japan had surrendered.

I wish Daddy had talked about his experiences more, even the mundane, boring days. Sadly, like my friends dad, my father's stories died with him.

If you know a vet, especially a World War II vet, ask them about their service. The brave men who fought in Europe, Africa, and the South Seas are getting older. One day, in our lifetime, they'll all be gone ... and what a shame that the treasure trove of stories they have will die with them.
Posted by Jackie Coleman - Author at 9:55 AM