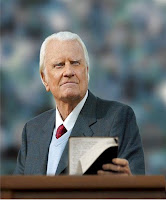 One of the world’s most Godly of men, Billy Graham, died yesterday at the age of 99. He was married to his college sweetheart, Ruth for almost 64 years (she died in 2007). I remember her giving an interview once, although I can’t remember the year.

She was asked, “In all these years, did you ever think of divorce?”

Her reply was memorable. “Divorce, no. Murder, yes.”

When I told my oldest daughter that Billy Graham had died she was as sad as I was. She, “I remember you taking us to see him and telling us that this might be the only time we get to see him in person because he was in bad health.”

I don’t remember that (how can I NOT remember that!), but she said she remembers it vividly. “It was a long time ago and I remember you were trying to get us to cooperate because we were NOT interested in sitting there listening and not doing anything. I specifically remember the importance in your voice telling me how important he is and how much you wanted to listen to him speak.”

Those do sound like words I would speak, but for the life of me, I can’t remember seeing him in person … but I guess I did. And I’m very glad I took my kids.

Billy Graham was a good man by anyone’s standards. Anyone, that is, except for William Martin at the Washington Post who, rather than talk about all of the good, selfless things this man did with his life, he wrote an article entitled “Divorce, drugs, drinking: Billy Graham’s children and their absent father”.

Like in all families, the Graham children had their moments of rebellion, but they have all grown up to be fine individuals. They are all Christians, proud to be part of his legacy, and are involved in the ministry he founded ... Billy Graham Evangelical Association.

As kids and young adults, we are all guilty of speaking half-truths (and sometimes outright lies) about our parents. Mr. Martin must have had a file of everything of his kids/grandkids ever did or said … just waiting for the moment he died so that he could do his best to slander a good man’s memory. I'm guilty of saying unkind things about my father at some point, too ... I'm just grateful my dad wasn't famous and that Mr. Martin doesn't have a file of all of the things my brothers and sisters and I ever said about our parents when we were angry at them or upset that we didn't get our way.

Even if you aren’t a Christian, you can’t deny Billy Graham was a good man. A man who gave of himself, at great sacrifice to himself and his family, to preach the word of God to the world and bring people to know Jesus as their Lord and Savior.

You don’t have to agree with Billy Graham's theology to see that he was sincere in his faith, trying to live a Godly life, and to be an example of the Lord's grace and goodness to others. I’m sure he had his failings as a man, a preacher, a husband, and a father … but I don’t think it was from lack of desire to be the man God called him to be, but because he is, after all, human. Regardless of how faithful we are, we all have failings and shortcomings ... even a great man like Billy Graham.

The difference between him and most of humanity (I by no means put myself in the same class of faith as this man), is that when he hurt someone or he fell short of who he thought God wanted him to be, he repented. He didn’t just repent … he faithfully repented. I tend to think of him as a modern-day David … a man after God’s own heart. David is a perfect example of how one can be guilty of horrendous sins and still be profoundly devout in his faith ... because he was genuinely sorry when he sinned. Unlike a lot of people, David wasn't sorry that he got caught ... he was sorry he had sinned.

Anyone can say they are sorry and promise to do better, but unless you follow that up with actions, “I’m sorry” has no meaning.

The point is, you don’t have to live a perfect, sinless life to be a good man … you just have to be genuinely sorry when you fail ... and you have to strive to do better and to not repeat the same mistakes.

I’m am truly heartbroken that Billy Graham has passed on, but oh so happy for him! After a lifetime of service and years in an aging, failing body that caused him pain, he is finally home. He is once again holding the hand of his beloved Ruth. The physical and emotional pain he lived with on earth is over. His soul is at peace. I have no doubt that when he stood in the presence of the Lord yesterday, he heard what all Christians long to hear …

“Well done, my good and faithful servant.”
Posted by Jackie Coleman - Author at 9:03 AM