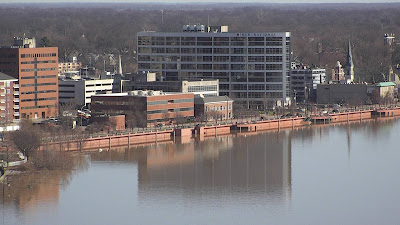 Contrast that to what it looks like when the river is not at flooding its boundaries. You can put the height of the levee into perspective by looking at the size of the people and cars compared to the levee. 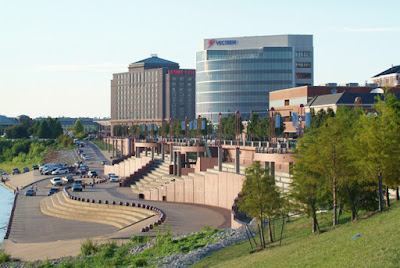 Below is another picture of the river right now. The picture is a little deceiving. It looks as though the water has overtaken the city, but the water is actually being held at bay by the flood walls, and the buildings pictured are not in any immediate danger. 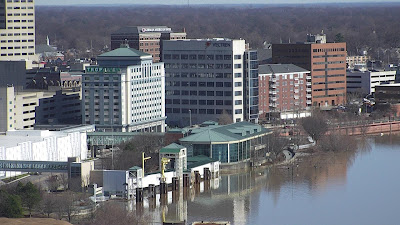 Even though the water would have to rise significantly to breech the levee and flood walls, the city elected to erect the removable flood walls ... just in case the river crests higher than expected. 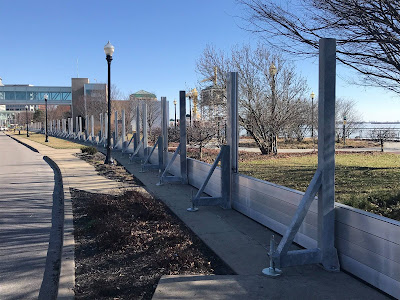 In Kentucky, just across the bridge, a herd of deer were photographed crossing a flooded road. Officials on both sides of the river have warned drivers to be particularly cautious when driving towards the bridges. The deer can no longer cross under them, so they are crossing the highway ... a recipe for disaster if one is driving too fast or not paying close attention. 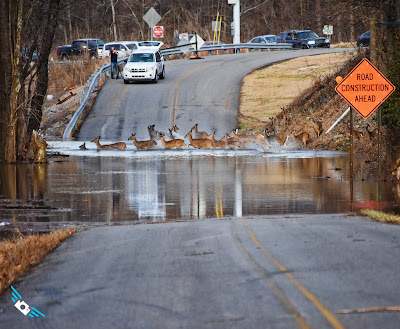 In 1937, the river crested at 54.74'. Much of the city was underwater. Long before the water gets that high, areas outside the levee system are flooded, and roads are impassable ... especially in "the bottoms".

The 1937 flood was historic not only in the height of the river and the damage, but also because of the duration. There were few other metropolitan areas that suffered greater loss, but despite being among the hardest hit, there were no drownings in the entire county.

Below is a video about the flooding here in 1937. Several people who lived through the flood are interviewed, giving their perspective of the pain of losing everything they owned to the inconvenience at having to continually move to keep ahead of the rising waters. It's eleven minutes in length, and very interesting ... and filled with incredible vintage footage of the flood.

After the 1937 flood, the city began building a levee system to keep the flood waters from ravaging the city ever again. This town has a bad habit of undertaking major projects with blinders on. Their design often defies logic ... particularly when it comes to building new roads. Rather than designing new road projects which will handle the growing traffic in the coming years, they build a road for the traffic pattern now. Depending on how long it takes to complete the project, it's often insufficient for the traffic flow when it's finally completed. The city is then forced to spend thousands, and often times millions of dollars, to fix the deficits of the original project. Sometimes the remodeling of newly opened roads starts before they can even take down the orange cones from the original, years-long construction! Those of us who live here find that beyond frustrating. Not only are we inconvenienced twice as long, taxpayers are forced to fund yet another project to fix the inefficient and poorly thought out design. Many of these design flaws are due to cutting corners and "trying to save the taxpayer dollars", but if you have to fund a project multiple times, you've wasted a lot more than you've saved.

The levee system, however, is the only project the city has ever undertaken where they did the job correctly from the beginning. The original levee has been improved over the years as newer technologies became available, but it's truly the only project where the officials did what was necessary, at great expense, to do the job right.

Below are a vintage few pictures of the flood.

Even though the levee keeps most of the city safe, low-lying areas are still prone to flooding, as are those who live in areas with inadequate sewers. The city is fixing those ... slowly. Even those who don't have to worry about water reaching their homes, the recent rains have saturated the ground and basements are becoming swimming pools. I've overheard horror stories of strangers and read posts on Facebook of friends who are battling major water levels in their basement. A lot of people ignore "High Water" signs and repeated warnings by officials not to drive into water-covered roadways. As a result, they end up losing their vehicle and endangering the life of rescue personnel. Tragically, one elderly man accidentally drove his car into a lake and drowned the other day.

No place is completely flood proof, but our levee system has made sure that the catastrophic flood of 1937 will never be repeated ... but caution and common sense is still advised.
Posted by Jackie Coleman - Author at 6:18 AM