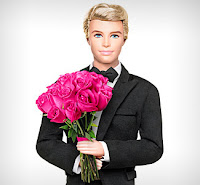 Growing up, my little sister and I spent a lot of time playing Barbie's. I drew out plans, my brother-in-law built a Barbie house (which I still have), and I set about decorating it.

Years later, I got the old Barbie house out for my own daughters. I put shingles on the roof, wallpaper on the walls, wooden shutters on the windows, bricked the second-floor deck, and put a wooden railing around it. The Barbie house is currently stored at my daughter's house, and I don't have any pictures handy, but I'll post some later. (I'll need to dig it out and clean it up for my granddaughter soon anyway!)

We had a lot of Barbie and friends, but we never had a Ken doll. My mother refused to buy us one. I have no idea why ... I mean, it's not like they were anatomically correct! So, when we needed a date for one of our Barbie's, we'd have to borrow one from a neighbor girl. I guess it's a good thing we didn't have Ken full time ... because one time he robbed Barbie with the gun from the Clue game!

Ken (and Barbie) have changed a lot over the years. Like us, I'm sure Ken has pictures he wishes he could erase from our memories! Check out the bootie cutters Ken rocked in 1979 or the suave, sophisticated Casanova of 1992! 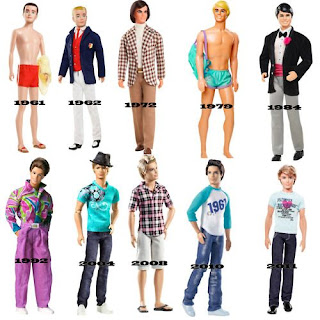 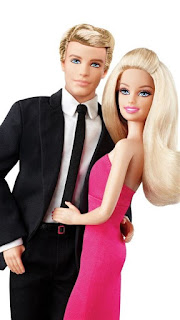 Posted by Jackie Coleman - Author at 7:54 AM