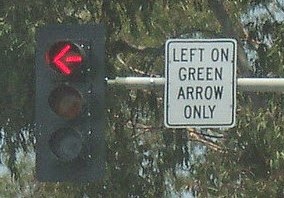 I have never understood why it is legal for me to make a left turn off of a side street, onto a busy street ... crossing traffic coming from both directions ... with no light telling me it's okay to go ... yet I cannot be trusted to turn left at an intersection with a traffic ... against one direction of traffic ... unless the left turn light is green.

Most traffic signals in my hometown allow left turns only when the left turn light is green. I live in a city nicknamed "Stoplight City" by truckers, so when I say "most traffic signals", I'm talking about a lot of traffic signals. I can't tell you how many times I sit at a red light while the traffic lanes for cars going straight remains green ... except there are no moving vehicles in sight.  The only vehicles at the intersection are the ones in the left turn lane (with a red light), and the vehicles on the cross street. We all sit there waiting for the light to change.

I could easily, and just as importantly ... safely ... turn left, but if I did, I'd be breaking the law. Now keep in mind that before I sat at this light for five minutes, I had to turn left onto this very road not too far back ... with no outside help from anyone, man or machine. Where is the wisdom in that?

The people who regulate traffic signals and roadways in this city probably have engineering degrees, and are a good reminder that even people who graduate in the bottom of their class can get a job with the government.
Posted by Jackie Coleman - Author at 12:15 AM