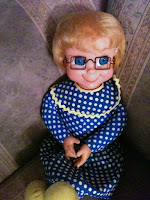 When I was a little girl, nine years old or so, I wanted a toy sewing machine and a Mrs. Beasley doll for Christmas. My little sister wanted a Barbie.

We weren't allowed in my parent's bedroom, and I never went in there, so I don't know why I did one winter afternoon, or why I looked in their closet. To my recollection, I had never looked in their closet before nor have I since. I believed in Santa, so I wasn't searching for presents. But there they were ... all of our Christmas presents ... unwrapped!

There was my little sisters Barbie, and my sewing machine! Oh, the beautiful creations I would make with that! And there she was ... the Holy Grail ... Mrs. Beasley. She was smiling at me through the box, begging me to hold her, but I didn't. And I didn't look in the closet again, either. I guess I was afraid I'd only dreamt it and that Mrs. Beasley wasn't really in there ... waiting for all the bike rides and picnics I had planned! I fell asleep, feigning blissful ignorance at what would be waiting for me under the tree!

Time seemed to almost stand still as I waited for the blessed day to arrive. Then, finally ... it was Christmas Eve! I come from a family of eight kids, plus my parents, so you can imagine the pile of debris we had when all of our presents were unwrapped! We had a long, rectangular living room. I was in the corner by the front door, ripping through my presents. I got everything I wanted, even presents I didn't want ... like some stupid Barbie ... but where was Mrs. Beasley??

Had I overlooked her somehow? Frantically, I looked around. No, there were no more presents for me! What happened to Mrs. Beasley? Had it been just a dream? Then I saw it. As I watched the horrror unfold, the color drained from my face, and it felt like the air was sucked from the room. I could barely draw a breathe! There ... in the opposite corner of the living room ... the farthest from me ... the worst travesty of justice was playing out before my very eyes ... my little sister was pulling Mrs. Beasley out of her box!

Overcome with confusion and disbelief, I grabbed Barbie and made my way (in slow motion) across the room towards my sister. I swam through wrapping paper up to my chin, and pushed away the boxes that tore at my flesh ... but I didn't care! I was desperate!! I had to get there before she hugged Mrs. Beasley!

Somehow I made it to her, only slightly dizzy from the loss of blood, but it was worth it ... Mrs. Beasley was almost in my grasp! Hiding my desperation behind the cheeriest smile I could muster, I held Barbie by her legs and pushed her towards my sister. "Trade ya," I said, doing my best Vanna White to emphasize the prize that could be hers.

I held my breath. "Please don't hug her," I prayed inwardly. If she hugged that doll, it would be over! I had to get my hands on that doll before she hugged her!! I was sweating by this point.

My sister looked at the beautiful, shapely Barbie in her fancy clothes, then looked down at the frumpy doll. Her big blue eyes stared out from her square glasses. Her body was blue with white polka dots, and she wore a matching collar and apron with yellow rick-rack trim. She looked from the homely doll to the glamorous Barbie, then back again ... and nodded. I almost cried with euphoria!! I'd done it! I'd gotten to her in time! "Hand her over, sister. Hand her over now!" I silently pleaded.

Then, she did the unthinkable. She hugged Mrs. Beasley. It was over. I knew I'd lost her even before my sister shook her head no. I dropped my arm to my side and hung my head in defeat. I felt like I'd been kicked in the gut. I felt like a bride left at the altar. Everything I had ever wanted had been at the tip of my fingers ... dangled before me like the proverbial carrot ... then it was cruelly ripped away!

No picnics at the Tot Lot down the street. No bike rides with Mrs. Beasley riding in my flowered basket, the wind whipping our hair in the blessed sunshine of summer.

I made several appeals to my mother to correct the horrible mistake she had made. My sister hadn't asked for Mrs. Beasley, I had! Apparently, Mama loved my sister more than she loved me ... because she took her side.

It was over. I had lost. I never did get a Mrs. Beasley doll.

I've relayed this story to more than a few people during my life, and they'd laugh. Although the pain has never quite healed, I do see the humor in it. It's a funny story ... almost like a romantic comedy with a sad ending that leaves movie-goers weeping in their seats.

I told this story to my boyfriend ... and he's the first person to hear the gut wrenching pain of unrequited love in my voice.

Tonight, we opened up our Christmas. After everything was unwrapped and the kids were surveying their loot, he asked one of the kids to hand him one last box, which he then handed to me.

It was a large box, but it was very light. He said it was totally frivolous ... to which I replied that was the best kind of present. (Who wants a vacuum cleaner for Christmas?!!)

She was smiling that cheery smile of hers. She knew she was finally home, and she as happy to be in my arms as I was to have her there!! And it wasn't one of the new ones ... it was a real Mrs. Beasley from the 60's. I hugged that ridiculously ugly doll, then I hugged him. I'm sure he thought it was the silliest gift he's ever bought ... but it's not! It's the sweetest thing anyone has ever done for me!! As odd as it may sound, I actually found it ... romantic.

I pulled her string and she said "I do think you're the nicest little friend I've ever had." 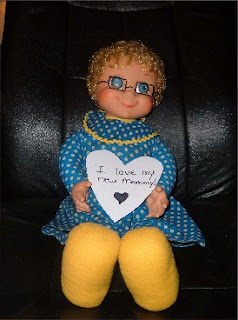 Mrs. Beasley loved me more than she loved my sister ... she had just told me so! Like Superman flying backwards to turn back time, my sweetie put right what once went wrong!

Mrs. Beasley was so happy, she cut out a heart, grabbed a Sharpie, wrote a sweet note, and had me take her picture. I know she loves me, but you should see the sappy way she looks my boyfriend ... I think she might have a crush on him:)