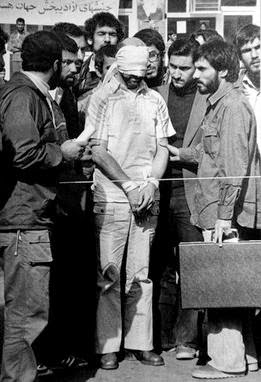 November 4, 1979, Muslim militants stormed the U.S. embassy in Tehran in retaliation for the United States friendship with the Shah. When the embassy guards brandished firearms, the protesters retreated, but as it became clear the guards would not use deadly force, the militants broke through the embassy gates. All personnel within the compound were taken hostage. After two weeks, the Ayatollah began releasing all non-U.S. captives, females, and minority Americans. 52 hostages remained.

On January 20, 1981, just moments after Ronald Reagan was sworn in as the 40th President of the United States, Iran released the remaining 52 American hostages, after 444 days of captivity. The timing of release was no mere coincidence ... the Iranians knew that Ronald Reagan would not sit meekly by while Iran held Americans hostage. They were not afraid of the spineless Jimmy Carter ... but they were afraid of Ronald Reagan.

The day the hostages were seized, six American diplomats evaded capture and went into hiding at the home of Canadian diplomat John Sheardown, under the protection of Canadian ambassador Ken Taylor. In late 1979, the Canadian Government secretly issued an Order In Council allowing Canadian passports to be issued to those six Americans so that they could escape. In cooperation with the CIA, which used the cover story of a film project, two CIA agents and the six American diplomats boarded a flight to Zurich, Switzerland, on January 28, 1980. The rescue was fictionalized in the 2012 film "Argo," with the movie showing a number of non-historical elements. (That last sentence ... that the rescue was fictionalized and showed a number of "non-historical elements" is per the History channel, not my personal opinion ... although I certainly agree with it.)

While I remember the hostage crisis, I did not recall ever hearing about the six Americans rescued by the Canadians until the movie "Argo", starring Ben Affleck, came out. My boyfriend and I went to see it. I looked around before the movie started. Most of those in attendance were not even born in 1979, so their knowledge of what happened was limited to what they were taught in school, and what, if anything, they remembered.

The movie started with a mock "documentary" detailing why the Iranians hated the Shah, painting him as a violent, dangerous man akin to the terror wreaked by Saddam Hussein. I was confused when I saw this. I didn't remember the Shah being a violent dictator, but that's how the producers of this film portrayed him. This Hollywood-produced "documentary" showed how Americans supported this "despicable" man, and that's why the Iranian's were so angry. The "documentary" made it appear as though the Americans deserved this treatment because of their friendship with the Shah.

Was I remembering history through rose-colored glasses? Had the Shah really been a horrible, violent, vicious man?

After the movie, I Googled the Shah of Iran. I couldn't find any website that documented, or even hinted, that he had been a brutal dictator. Quite the contrary ... he was very western-thinking and believed in democracy. In reality, his western values were what angered the Iranians ... not his "brutality". That point, it seems, was manufactured by the film's producers for their opening "documentary". The Shah fought for education for everyone, especially girls and women. School attendance soared under his reign, to the point that Iran's labor market could not absorb the high number of educated youths. Despite this fact, the national income of Iranian citizens show an unprecedented rise during his reign.

The Shah was certainly not without flaws. His extravagant lifestyle was in stark contrast to the lives of the ordinary Iranian. There were several instances where the army opened fire on religious rioters who would not disperse, killing and injuring a large number of people. I'm not defending everything this man did, but he was not the brutal dictator Hollywood depicted in their "documentary".

I don't have a problem with Hollywood taking creative liberty with the minor facts when producing a movie, but when making a film of historical significance, I take umbrage at producers presenting blatant lies and distorting the facts to fit their agenda, and then presenting that as "fact" in the form of a "documentary".

I read an article the other day that high ticket prices are the reason for slumping movie ticket sales. I'm sure that's part of it, but there are also a growing number of Americans who simply refuse to support the lifestyles of people whose views are so diametrically opposed to their own or distort reality (aka history) to fit their own skewed ideologies. I am one such person, and I know many others who refuse to plop down $10 (or more) to see a movie starred in or produced by someone for whom they have no respect. This drives my boyfriend crazy at times, but he understands my stance, and we find something else to watch. There are plenty of movies out, so there is always a plethora of other options.

I would really like to see Gone Girl, but I refuse to pay to see any movie that Ben Affleck is associated with. I'll just read the book. The book is always better anyway.
Posted by Jackie Coleman - Author at 7:30 AM