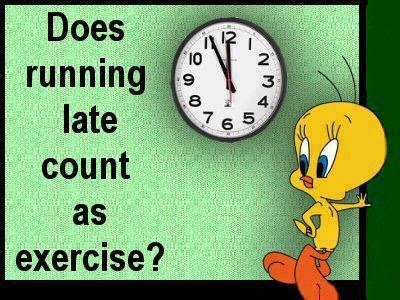 When I was growing up, my parents stressed to me that being on time (or early) is mandatory ... not optional. I don't recall ever being late for school, school functions, extracurricular activities, church, parties, etc. My parents taught me that it's rude to be late, that it tells someone their time isn't as important as yours, and you really don't care if they are inconvenienced because of you. As an adult, I can count on one hand the number of times I've been late for work, and those were usually due to the alarm not going off because of a power outage.

I was a single mom of a newborn, a 1-1/2 year old, and a 3/1/2 year old, and I managed to get the kids to daycare and make it to work on time ... every single day. My now ex-husband and I were separated when I was pregnant with our third child, and we were still separated when I gave birth. There was no one to help me, and I was still on time for everything ... because it was important to me.

I tried to stress the idea of being on time to my kids when they were young. I started by making sure were never late to anything. One time the girls had a birthday party to go to and I couldn't get them to quit playing and get ready to go. When they finally got ready, it was time for the party to start and the venue was on the other side of town. I told them they couldn't go because it's rude to arrive 30 minutes late. They cried and cried, but I didn't give in. As a result, I never had to nag them to get ready for anything ever again ... especially parties! Thing 1 is my most punctual child ... she arrives chronically early (so do I ... I guess the apple doesn't fall far from the tree). Things 2 and 3 don't arrive quite as early as Thing 1 prefers, but they are always on time.

Diana DeLonzor, author of 'Never Be Late Again' said, "Yes, being late is a rude act, but I've interviewed hundreds of people and the vast majority of late people really dislike being late. They try to be on time, but this is something that has plagued them throughout their lives. Telling a chronic late person to be on time is like telling a dieter, 'Don't eat so much.'"

She went on to say that the issue might have something to do with fundamental differences in the way we think. In her research, she's found that late-arriver's tend to perceive time differently than their punctual peers, saying. "Part of my research included a test to measure the differences in how timely and late people perceive the passage of time. The test I devised is a simple one you can try yourself. Choose three or four pages in a book, mark the time, and start reading. Stop reading when you think ninety seconds have elapsed, then check your watch to see how accurate you were. I found that early birds, almost without fail, stopped reading before ninety ­seconds had passed, while lateniks put their books down well ­after the ninety-second mark."

My take on that study is that I think the on-time people quit reading before 90 seconds had passed because they didn't want to miss the mark. They would rather err on the side of caution than be late. The lateniks quit reading when they wanted to, with no regard to how much time had elasped. I'm not surprised at the results of her experiment. If you spend your life not caring if you are late, you're not going to care if you read more than 90 seconds. I don't think "latenik's" perceive time differently ... they don't care about time. They also don't realize the effect their chronic tardiness has on their reputation.

I propose an alternative test for those who are chronically late ... give them the same test, but add this caveat ... tell them they will be given a new car of their choosing if they quit reading when 90 seconds have passed. I can pretty much guarantee the chronically later's would be able to perceive 90 seconds when there's a shiny carrot dangling in front of them.

Anyone can be on time if they want to. You can make all the excuses in the world, but if you are always late, it's because you don't care if you inconvenience others ... period.

Here's my advice for people who are always late ...

Posted by Jackie Coleman - Author at 9:00 AM