Davy's car has not ran for over two years, maybe three. It's been sitting in front of my house all this time, which means I had to license a car that doesn't run. I switched the car loan to a signature loan last year so that I at least didn't have to carry insurance on it anymore. I suppose I could have scrapped it years ago, but I kept thinking I might get it fixed or sell it to someone to part out. When Davy died, the idea of selling his car was too much to contemplate.

Knowing I was going to salvage it later in the day, I was on the verge of tears from the moment I woke up. When it came time to actually start the ball rolling ... I lost it. I cried while I was cleaning it out, checking for anything he left inside. I cried when I called a salvage yard and arranged to have them tow it for scrap, and then I cried while I waited for it. I cried when they came to load it on the truck. I followed the tow truck to the salvage yard, tears streaming down my face, and I cried the entire time I was there. I was crying so hard I had to stop and compose myself before I could speak. I'm sure people behind me in line thought I was being a little overly dramatic, but they didn't know the circumstances behind scrapping this car.

I co-signed for the car for Davy because no one else would. I did it so that he knew I had faith in him. He needed a reliable car and he had a good job that would allow him to easily make the payments. He had thrown a LOT of obstacles in his way, but things were looking up. I wanted him to know I believed in him and was proud of him. About six months later, the engine seized and he had quit his really good job ... and so I became the proud owner of a car that didn't run and would take a couple thousand dollars to fix. I guess I held onto it so long because I was hoping he'd get another good job, save up the money, and get it fixed himself.

Right up until the end, I held out hope that he'd get his act together and finally grow up and take responsibility. He was making great strides, but then he hurt his arm, and that threw him back ... and that made it almost impossible to get a good paying job. Still, he kept looking and was willing to take anything, but when you can barely use your right arm ... and you're right-handed ... employment prospects are few. Even so, I kept encouraging him. I knew he was smart enough and resourceful enough to get through that rough patch ... and he was ... right up until that car mowed him down and kept on driving. 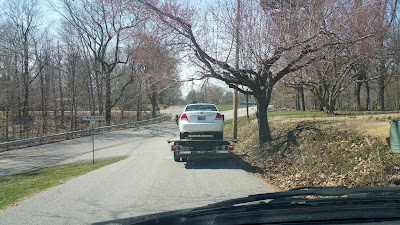 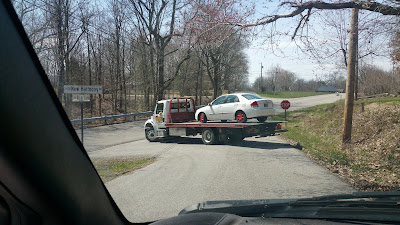 He had a "Smile More" sticker on the back. I was hoping it was a magnet, but it wasn't. There was some website or YouTube channel Davy liked that had that slogan. One day I hope to smile more, but yesterday was not that day. 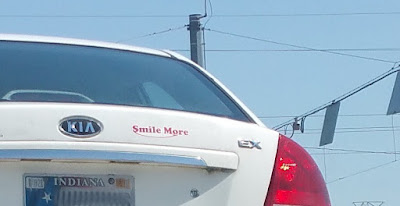 I'm sure my neighbors will be glad to see the car is gone, and anyone else who uses the cul-de-sac to turn around ... but letting go of that car was like losing another piece of Davy ... and it hurt.