I bought the first Christmas present a few days ago ... and it's safely recorded in my 2014 Birthday/Holiday Spreadsheet! 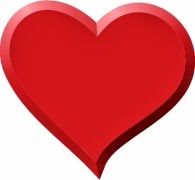 Valentines presents are bought, I've started on Easter, and I have one birthday present purchased (and recorded in the spreadsheet!). "Birthday Season", as I like to call it, runs from late June to early January.

Actually, saying I have one birthday present already bought is a half-truth ... the birthday present I've have stashed away is really a half-birthday present. My boyfriend and his daughter both have birthdays in the winter, right around the holidays. That's an icky time of year to have a birthday, so I created half-birthday's for them, and I buy them a small gift or two. Sometimes I leave it at their house for them to discover, and sometimes I give it to them with a candle in a Little Debbie Cake and sing "Happy Half-Birthday To You"!

My kids were a little upset that they don't get half-birthdays, but they were all born when it's pretty out ... and they are already plenty spoiled. The last thing I need is yet another occasion to buy them a gift!

I reminded them that I don't get a half birthday, and neither does my boyfriend's oldest daughter, her husband, or their two sons. One of his grandson's was born in a month with pretty weather, and the other was born around the holidays ... but I can't give one grandchild a half-birthday and not the other! Besides, we have five kids between us, and the potential for many more grandchildren, so I decided that was a tradition I wasn't going to start!

In addition to everything I already have to do, I have a book to finish and a wedding to help plan, so I have a lot to do this year. With a little luck, I'll have all ... or most ... of my Christmas shopping done before birthday season begins!
Posted by Jackie Coleman - Author at 10:33 AM