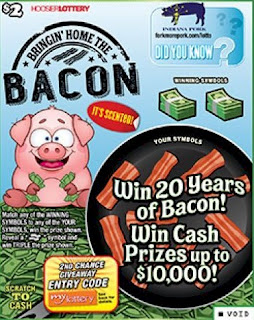 I don't play the lottery. I never have and don't anticipate I ever will. The PowerBall Lotto recently went to a record high, and I wasn't even tempted. I've never been lucky when it comes to games of chance. That's not to say I have never won, but it's been the (rare) exception rather than the rule.

I'm not opposed to entering a contest based on skill. Even those have an element of luck, but the chances of winning aren't nearly as astronomical as winning the lottery. I feel better, and am more successful, when competing against others using brains or talent instead of hoping for dumb luck. Money is money, regardless of how you win it ... but winning on skill gives you something to be proud of ... because you earned it.

A while back I was in a convenience store and I saw there was a bacon-scented lottery scratcher, This seemed a rather pathetic attempt to get otherwise non-lottery people to buy them. You can win up to $10,000, and a 20-year supply of bacon. I wondered how they calculated how much bacon that is. As I read further, I found out ... "the 20 year supply of bacon allows winners to receive $250 worth of bacon once a year for 20 years — or a lump sum of $5,000".

I love bacon, but not enough to blow $2 a pop on a chance to win it "for free" ... even if it comes with a side of cash. Besides, I'd have to buy a freezer and pay the electricity to run it in all year in order to hold my $250 worth of bacon ... so that "free" bacon becomes not so free.

I don't spend $250 a year on bacon, so if I won ... (which I wouldn't) ... I'd have to take the $5,000 lump sum and give one-fourth to one-half of it to the government. I'll come out money ahead if I just continuing buying bacon when I need/want it and let someone else throw away their hard-earned cash with the improbable chance at winning it.
Posted by Jackie Coleman - Author at 10:17 AM