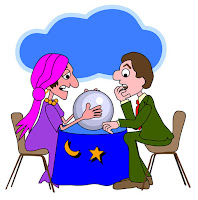 A man in Brooklyn went to a female fortune teller for help to fix a romantic relationship. She told him that evil spirits were keeping him and his lady love apart. Over the course of a year, he gave her a lot of money, including $80,000 for a bridge of gold to allow the psychic to trap the evil spirits in another realm.

One year later, $700,000 poorer, and no closer to winning back the heart of his one and only, the man reported the scam to the police. The psychic and an accomplice were arrested and charged with grand larceny.

I'm a bit of a skeptic when it comes to fortune tellers. I do believe there are individuals whose intuition is better than others, but I do not believe anyone can see the future or talk to the dead.

It appears to me that the only thing this woman could "see" was that this particular gentleman was gullible ... and wealthy. Had she possessed any real psychic abilities, she would have foreseen that he would get wise to her scam, albeit later than most, and that he would report her to the police ... who would then arrest her for grand larceny. So, not only does she not have the ability to see the future, she's not very intuitive, either!