If You've Been Wondering Why I Haven't Been Posting ... 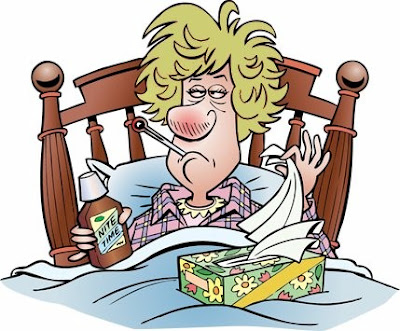 It's because I've had the flu. I missed a lot of work this week, and the little bit of time I was there, I was feeling pretty sluggish. I wasn't contagious, but everyone gave me wide berth when they heard me coughing like I was going to hack up a lung. Now it's gone into bronchitis and a sinus infection. Oh, goodie! I'm still coughing and feeling not quite my normal self, but I think the antibiotics have kicked in and I'm on the mend ... and I'm hoping I'm done with colds and the flu for a long, long time.

A friends has stopped by to bring me something to check on me and bring me something eat, but I haven't had much of an appetite. I've been thirsty as all get-out, but I haven't been hungry at all. This week, I've pretty much lived on milk, water, a couple of peanut butter sandwiches, animal crackers, and Goldfish ... the Goldfish cracker snack that smiles back ... not actual Goldfish.

My fever has finally broke ... again ... and I think I'm finally getting better. I have coughed until my abdomen aches and my throat felt raw, and I've gone through several boxes (and counting!) of tissues. When I told my bosses I couldn't come in, one of them mentioned that it sounded like I really needed the upcoming three-day weekend. I told him I needed "nose Drano" more!
Posted by Jackie Coleman - Author at 5:19 AM