I took a couple of days off to get some work done in my yard. For once, it was warm and it hadn't rained in about a week. I didn't work too terribly hard, but I got a few things crossed off my list ... the things that mattered the most ... cutting the grass and getting the rest of the ivy off of the trees.

It's hard to see the ivy growing on the trees in this picture, but there were about 15 trees with ivy. Eight or nine had really, really thick vines growing on them. The others had smaller vines. 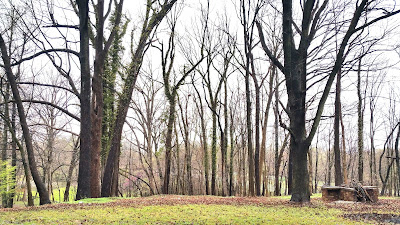 In case you don't know how thick ivy vines can get, here's a sample. The yellow arrows show the ivy cut ... the one hanging next to the tree is ivy ... not a tree growing nearby. 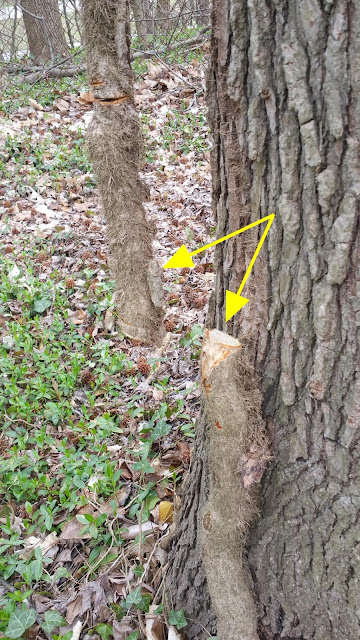 Here's a tree with the ivy removed. I'm not concerned about getting the entire vine off the tree (as if I could), my goal was to kill it's food source at the ground. 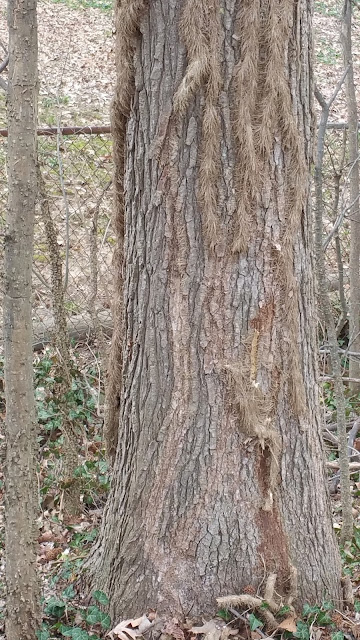 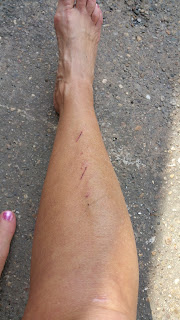 It wasn't without injury, but the cuts are superficial. My leg brushed up against the saw (a tree saw, not a chainsaw). It didn't hurt, it's just going to mess up my tan when they heal!

It takes a few months for the ivy to die, so it will be fall, when the leaves are gone, before I can be sure I've gotten it all ... and I'll have to pull off new vines that try to grow up throughout the year, but I think I've got a handle on the ivy ... finally! When I moved here, every tree in the woods had ivy, so even though it doesn't look all that impressive, I've spent many an hour cutting down ivy and checking for ticks!
Posted by Jackie Coleman - Author at 7:18 AM