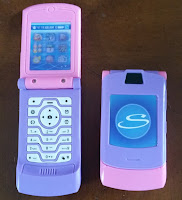 Growing up, the bottom four kids in our family (all girls) were born within five years of each other, so when birthdays came around, my mom made sure we all got gifts. Sometimes we all got the same thing, sometimes we got something different, but the point was that no one was left out and/or jealous. Once we were all old enough to understand the concept of birthdays and birthday presents, only the birthday girl got a gift.

I continued the tradition with my kids (and now grandkids), and I make sure I have gifts for all of the siblings when attending birthday parties for other children with brothers/sisters close in age.

Last year, when my oldest grandson turned two, I bought him a tricycle. For his little sister, I bought a flip phone (that makes noise). It came with a key fob, that also makes noise. She was only 15 months old, so I didn't have to match the amount I spent, just the "wow factor" ... and for a 15 month old, a phone and key fob that make noise is pretty "wow"!

She loved the phone ... but so did her brother. Nevermind the fact that they have three other phones and an "ipad", that all make noise, that silly flip phone became the toy they both coveted and fought over. 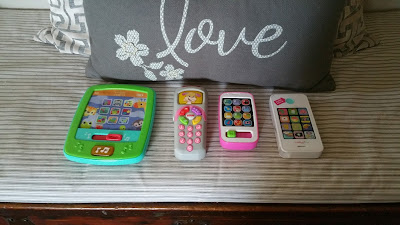 One Saturday Thing 1, (tired of listening to them fight and cry over the cheapest toy they own!) said she had looked for another one, but couldn't find any. We flipped over the phone and looked for any information that would lead us to another one. A minute later, she said "I found it on Amazon. It will be here Monday!" True to their word, it was delivered on Monday.

The next Saturday, I handed both babies their own flip phone ... and they were elated! My grandson put his on the table next to him so that he could play with his newfound love ... Playdoh. 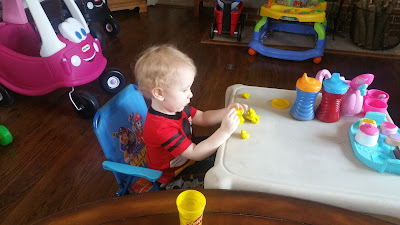 His sister saw the phone, relatively unguarded, and snapped it up. As happy as one phone made her, two phones gave her twice the delight!! However, even though he wasn't playing with it, he wanted it back.

I made her give him his phone back. She did ... but she did her best to let me know it was probably the worst thing that had ever happened to her in her whole life ... then hopped into her pink Cozy Coupe and headed off to run errands. 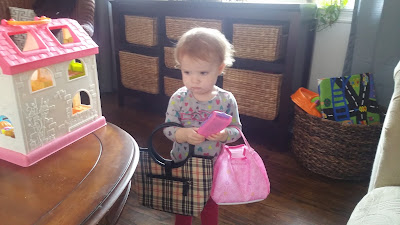 At some point, my youngest grandson is going be mobile ... and able to steal toys from his cousins ... so I should probably get on Amazon and order another flip phone ... for the three of them to fight over! 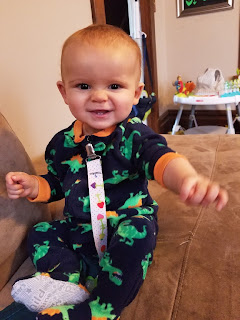 Posted by Jackie Coleman - Author at 8:26 AM