This is a classic example of how something so ordinary can trigger memories of my son. Davy LOVED pancakes. Growing up, he was always asking me to make them for him. One day I decided he was old enough to make his own pancakes. I got out a cookbook and showed him how to make pancakes without a mix. 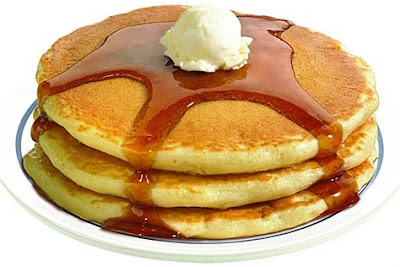 That was all it took. He was off and running, making pancakes for himself, and his sisters and I, at the asking. Thing 2 won't eat anyone else's pancakes. I can't think of pancakes without thinking of Davy ... and wishing he were here to make me a stack.

Davy was actually a pretty good cook. He could take a handful of simple ingredients and come up with some very flavorful dishes. His homemade Sloppy Joe's were better than Manwich. Davy was very intelligent and excelled at anything he put his mind to. How sad that someone cut his life short ... and all of his potential, and then drove away without a word, leaving his body on that dark stretch of highway. I will never understand how someone could do that and live with themselves.

The only consolations I have are that he was a born-again Christian, so I know I will see him again one day ... and that the autopsy report convinced me that he did indeed die immediately. I don't have to wonder if he suffered or if he could have survived had help been summoned sooner.

I am still hoping that the conscious of whoever did this will get the better of them and they'll come forward. Until then, all I can do is to keep urging people to keep their eyes open for a 2000-2002 Silver Honda Accord with front end damage ... and pray the damaged hasn't been repaired.

Posted by Jackie Coleman - Author at 5:44 AM