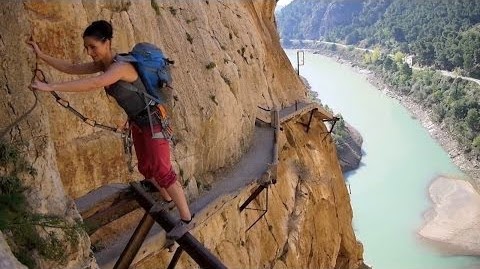 Spain's El Caminito del Rey, said to be the world's most dangerous walkway, is set to re-open soon. As someone with a paralyzing fear of heights, I cannot wrap my head around the mindset of people who enjoy this type of "thrill", but they do exist ... by the hundreds of thousands. I, however, am not one of those people. Nothing could ever convince me to get on that trail ... not even a gun to my head.

Take a few moments to search for video's of it. They make my stomach do flip-flops. I'm sure it's on more than one "Bucket List" ... but it's definitely not on mine!

Oddly, I wrote this blog post about a week ago, and the other night, my sweetie told me about a video he'd seen of an insane hike. I asked him if it was El Caminito del Rey. His mouth fell open and he asked how I knew that. I told him I had a blog post already written about it! He found that coincidence incredulous!

Together we looked up a few video's on it and watched them. He watched with a smile on his face and a twinkle in his eye ... while I looked on like I was watching an autopsy. I asked him if he would actually hike it, and he said yes. I don't do "scary", and he knows that. When he wants to watch a scary movie, I tell him I think that's a "Daddy/Daughter" activity, which is what I told him about this. He said he'd have a heart attack if one of his daughters attempted this hike ... but he'd do it in a heartbeat. I told him "Not if I have any say in it" ... which I don't. As much as I want him to experience all the things his heart desires, this is one adventure I'm not keen for him to participate in. I wouldn't even be able to watch him from the safety of the ground ... I'd have to be back at the hotel ... sedated! 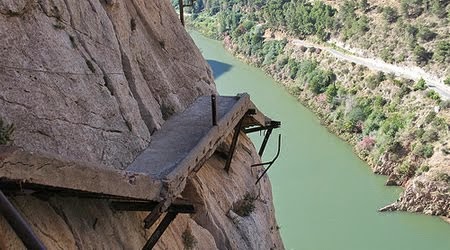