The World War II Memorial in Washington, DC was dedicated on April 29, 2004 to honor the brave men and women who served during the war. I think it's a shame that it took 59 years to honor these patriotic American's. Sadly, many of those who served never lived to see this monument ... my father included. My kids and I went to Washington DC on Thanksgiving Day, 2004. The memorial was still under construction and hidden from view ... and I really wanted a glimpse!

Four Hundred Thousand Americans lost their lives during World War II. One wall of the monument holds four thousand stars, one star for each one hundred American's killed. Had these men and women lived, most would have came home and started a family. It's hard not to wonder what these men and women, and their children and grandchildren, could have accomplished. Perhaps a cure for cancer ... or, on a lighter note, perhaps they would have perfected the hovering skateboard from 'Back to the Future'. 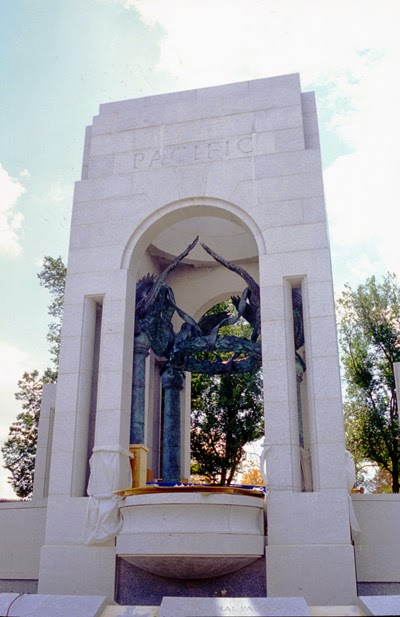 My father fought during World War II in the Pacific Theater. I wrote a blog post about my father's service during the war (you can read it here), and his crossing the equator on D-Day, June 6, 1944, as part of General MacAuthor's promise to return to the Philippines and liberate them from the Japanese.

Those who fought this war, both at home and abroad, are often referred to as 'The Greatest Generation', and I couldn't agree more. I do wish, however, that my generation or my children's generation could be called that, but we won't be, and we shouldn't be ... because we aren't.

Maybe one day a new generation of children will be raised with the same faith and patriotic spirit of my parents and they will emerge as a new 'Greatest Generation'.
Posted by Jackie Coleman - Author at 8:39 AM