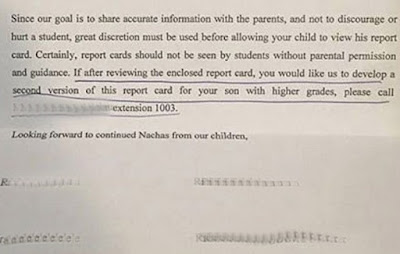 A private Jewish school in New York sent home report cards with a note to the parents that said "If after reviewing the enclosed report card, you would like us to develop a second version of this report card for your son with higher grades, call ..." The grades on the child's record wouldn't be altered, it was just an offer to present higher grades to the students so that they didn't feel bad. This takes coddling to a whole new level, doesn't it?

Isn't that ridiculous? I don't know why parents feel the need to shield their child from all failure. In my opinion, if one want better grades, one first needs to know they're not getting good grades already ... and then one needs to work harder. I don't know about your kids, but if my kids thought they were doing pretty good in school, they'd think they were putting in enough effort. They wouldn't try harder if they thought they were currently doing well!

There was an article recently about a young child, whose parent is a professional athlete (I believe). His daughter participated in some kind of track meet. In her first event, she didn't do well, but she received a "participation" ribbon so that she didn't feel bad about losing. Her father made her give it back, telling her she hadn't earned a ribbon just for trying. Good for him! She returned the ribbon, and then worked harder when she ran the next events ... and actually earned a ribbon for her performance.

I never pushed my kids to win. I wanted them to do well and I wanted them to win, but sometimes I enrolled my kids in activities just because I wanted them to have the experience of trying something new. Afterwards, I'd ask them if they tried their hardest. They would (almost) always say yes, to which I'd tell them that if they had did their best, that was good enough for me ... but if they wanted to win, they'd have to practice more.

Many years ago my stepson brought home a report card with mostly C's and D's. He was a smart kid, so I knew these grades were a reflection of his laziness, not his intellect. I looked at his report card and told him I'd help him get his grades up. When his father came home, he heaped praised on his son for a "great report card", and he was angry at me for not doing the same. To me, an intelligent child getting those grades wasn't acceptable. I would never punish a kid for a bad report card, but I wasn't going to reward him for one, either.

When I was growing up, only the best were rewarded in sports, arts, and academics. Did I always do well? No. Did I always win? Of course not. Did I want to win? Yes, and losing didn't make me give up ... it made me work harder so that next time, maybe I would win! Besides, that's not how it works in the real world. Adults don't get raises and promotions for mediocre or sub-par work. To grow into successful adults, kids need to know how to lose and how to win.

America is a nation built on hard work and ingenuity. No one wins if everyone is a "winner".
Posted by Jackie Coleman - Author at 10:15 AM