I Have an Owl! 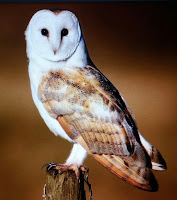 He's not actually mine, of course, he just lives in my woods ... but I called dibs :)

We had an owl at my old house. The kids named him Hootie I only saw him occasionally, but I often heard him (and another owl) calling out to each other.

I have heard an owl here at my new house on numerous occasions, but until the day before yesterday, I hadn't seen him. When I walked into the kitchen Sunday morning, he was sitting on the corner of the garage roof. He flew away before I could take a picture. I've named him Barnie ... Barnie the Barn Owl.

Later, I got online to look at owl species to see what kind he is, and it appears he's a barn owl. The outside of his wings are mostly an orangish, rusty brown. (The picture at the left is not Barnie, it's just the closest picture I could find.)

Yesterday I was sitting on the back deck having coffee when he flew up. He started to land on the garage roof, exactly where I had seen him the day before, but I guess he saw me and got spooked, so he flew off into the woods.

I'm so happy to have an owl here! I think I'm going to set up a motion-activated camera and attempt to get a photo of him. I'll probably get a lot more birds and bugs than owls, but if I'm patient, I'll capture a picture of Barnie. If I aim the camera at the right angle, I can get photographs of hummingbirds at my feeder, too.

I don't know why, but seeing owls and hummingbirds makes me immensely happy!
Posted by Jackie Coleman - Author at 8:43 AM