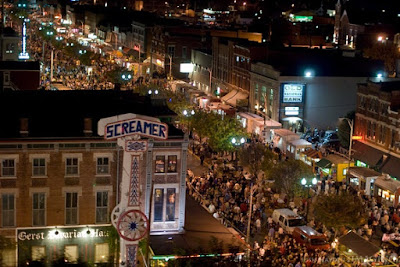 The first full week of October is a much longed-for seven days around here ... it's the week of the West Side Nut Club Fall Festival. Kids look forward to the rides and games, but most adults drool year-round for the food only available one week in October. Unlike most street fairs, most of the food is reasonably priced, and for $20, you can buy your child a bracelet that lets them ride all the rides they want.

I'm sure there are healthy options at the Fall Festival, but they are rare. Most of the food at the 126 booths is fried and dripping in calories. I know more than one person who download a Munchie Map well in advance to plan their week of eating, hoping to taste a little bit of everything. I am not one of those people. Several years back, I discovered shrimp creole and bread pudding at the German Township Booster Club booth, and I've never looked back.

For kids growing up on the west side, going to the Fall Festival is not optional. As the parent of three west side children, I have spent thousands of dollars on food, ride tickets, and games over the years ... but it was money well spent. The food booths are almost exclusively non-profit organizations, and the Nut Club donates a portion their profits to west side schools. The Nut Club also has egg hunts at Easter, pictures with Santa in December, and other events for children throughout the year.

Each year there is a pet parade, lighthouse parade, and a main parade. There is also a tug-of-war between west side schools, with the winners receiving bragging rights for a full 365 days. Every night there is Amateur Hour followed by a local band on the main stage. And, unless you've been living under a rock, you will see pretty much everyone you know at some point throughout the week.

It seems like every year one or all of my kids would win a goldfish (that I had to hold while they rode rides). The first year they won fish, I bought an aquarium for the fish to live in until they died, which was never more than a week or two. By the time the fish died, the kids had lost interest in them, so it was never sad. When the last fish died, I'd clean up the aquarium and pack it down to the basement, where it would stay until the kids won another fish at the next Fall Festival. 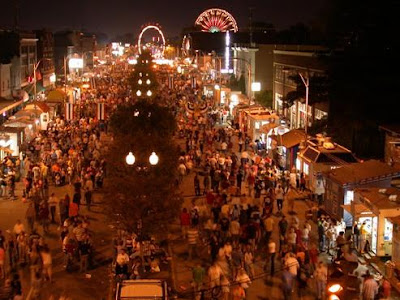 The kids and I have made many memories there over the years. I can't help but smile when I remember how excited the kids would be every time I told them we were going to the Fall Festival. Now that they are older and can go anytime they want, they are smiling and excited every time they tell me they are going ... and that makes me smile, too. In fact, I'm smiling now!