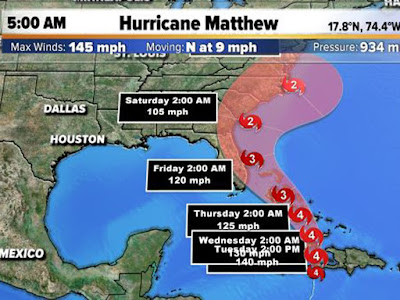 I've been watching the Weather Channel for news as to how Savannah and Charleston have been affected by Hurricane Matthew. I believe the most damaging winds have passed Savannah and are now ravaging the South Carolina coast.

Savannah and Charleston are two of the most beautiful cities in the world (according to me!). The word that comes to mind when I think of them is ... charming. The centuries-old homes and churches, surrounded by Spanish moss dripping from gnarly, weathered Live Oak trees has a magical quality that melts my heart. Even in the dead of winter, these two cities are breathtakingly beautiful.

I don't want anyone to lose their home or livelihood, but it's the old architecture that concern me during storms like Matthew. Even though we have the technology to easily make architecturally ornate buildings, most new construction is boxy and devoid of such embellishments. Luckily, the old antebellum structures are built sturdier than modern construction, and they weather these monster storms much better than their newer neighbors.

I'll have the grandbabies today, so I won't be able to keep an eye on Matthew as he makes his way up the coast of the Carolina's towards Ocracoke, but I should be able to sneak a peek at the news a couple of times ... and I'll be praying for everyone affected. One thing I know for certain, though, is that regardless of the damage, the South will rise again!
Posted by Jackie Coleman - Author at 8:00 AM