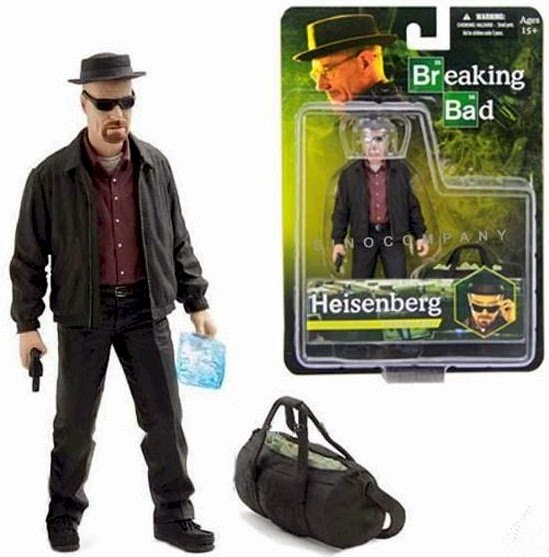 Yes ... you read that correctly. Toys-R-Us is selling action figures of the leading characters on Breaking Bad ... a television show about a terminally ill man who starts making crystal meth so that he can leave money to his family when he dies.

And ... these action figures come complete with "toy" meth and bags of drug money!!!!

Anyone who reads my blog already knows of my disgust for this show (Breaking Bad Blog).

As disturbing as the premise of this show is, and as distasteful as it is that this show was so popular and critically acclaimed, it pales in comparison to how offensive it is to market action figures to children. Toys-R-Us claims these dolls are for adults, not children, but I've been around a long time, and I have yet to meet anyone who shops there for toys for themselves. Until I read an article on these action figures, I wasn't even aware Toys-R-Us had an "adult section"!

Honestly ... how many times have you heard, "Hey! Toys-R-Us has new adult action figures out! Let's go get some!" or "Let's skip lunch and go see what new toys they have in the adult section at Toys-R-Us!"

I wish Hollywood (and toy companies) would have the moral decency to tell themselves that even though they can make money on a show glamorizing the production and selling of drugs ... they shouldn't.
Posted by Jackie Coleman - Author at 8:49 AM