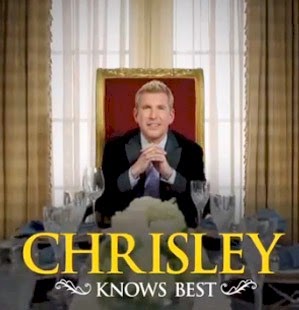 When Chrisley Knows Best first aired, my girls were watching. Thing 1 turned to Thing 2 and said, "Mom can never watch this show. We don't need to give her any ideas."

Apparently, Chrisley reminds my daughters of me ... albeit a wealthier ... and even stricter ... male version of their (abnormally sweet) Mama. According to them, his sarcastic wit and insults are hilarious. (I knew it ... they DO think I'm funny!!)

Hence, my daughters have forbidden me from watching Chrisley Knows Best.

Despite their fears that I'll watch and get more ideas or discover I have an unlikely ally down in Georgia ... there's no reason for them to worry. I don't watch any "reality" television.

However, I was recently in the room when Thing 2, giddy with excitement, announced the season premiere for Chrisley Knows Best was coming on. She must have forgotten that I wasn't allowed to watch ... or she was just too excited to remember ... so I stayed to see what all the hype was about. I could only watch about three minutes before I felt my IQ dropping! So don't worry, girls ... I won't be watching Chrisley Knows Best.
Posted by Jackie Coleman - Author at 8:10 AM