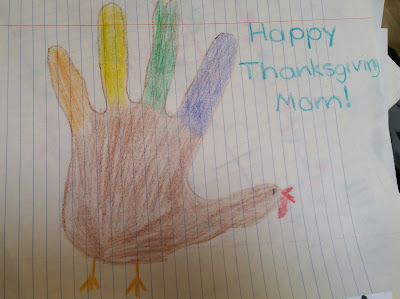 It's my fault. When the kids would draw me pictures, I'd make over them and tell them how good they were. And, that wasn't a lie. I did think they were good! Spurred on by my praise, Thing 2 drew and drew and drew ... and drew!

After being presented with, I don't know, 769 Thanksgiving cards with turkeys one evening, she brought me yet another Thanksgiving card. It had a turkey on the front (surprise, surprise!). She looked at me and excitedly said "Open it up! Look what's inside!"

I opened it up. Unlike the other cards with "Happy Thanksgiving" written inside, this one had a turkey. I guess I was expecting something she hadn't been drawing me ... like pilgrims and indians, Indian corn, a table piled high with food, or even a cooked turkey ... but staring back at me was a turkey ... identical to the other 769 turkeys she had drawn me that evening!

When I saw the turkey, I said, "Another turkey." I didn't mean to, but I said it with about as much enthusiasm as I would if I discovered a cavity in my tooth. The poor little thing was crushed. She said "I thought you liked my turkeys." I told her I did like her turkeys, that I was just tired. She believed me and continued drawing me turkeys ... until the holiday passed ... at which time she began drawing me Christmas trees, candy canes, and Santa's!

"Another turkey" has become a euphemism around here for anything repetitive, such as when I buy corn on the cob to cook and freeze. We all sit around the table shucking it. As time goes on, and the pile seems to grow rather than shrink, one of us will reach out and grab an ear and say, "Another turkey."

A couple of years ago, with my kids blessing, I went out of town for Thanksgiving. I made a giant pot of green beans for them to take to my sister's, because they all LOVE my green beans. When I was sure all of the kids were up, I started texting pictures of turkeys every 15 minutes or so. It took about three turkeys before they caught on and replied ... "Another turkey."

Regardless of what you are doing today ... from getting together with a huge family to an intimate gathering of a few friends to a day of solitude ... I hope you enjoy your day and find something to be grateful for.
Posted by Jackie Coleman - Author at 7:25 AM