Out of curiosity, I casually looked online to see what toy kitchens are going for these days. They had some I really liked that were made of wood, but I'm hesitant to buy one of them. I picture the same quality as some of the wood shelves you can buy ... they are fine until you move them. Once you move them, the inferior "wood" destroys the integrity, and they never sit right again. The plastic ones they make will hold up to the test of preschoolers and time, but I didn't like any of them. What I really wanted was one like my girls had when they were little, and I was dismayed to find they don't make that style anymore.

I searched online for a used one. I found several, but they were selling for more than I paid back in the 90's. They were also pick up only, and they were all a thousand or more miles away. I almost purchased an old entertainment center that can be used to build a really sturdy kitchen, like below ... 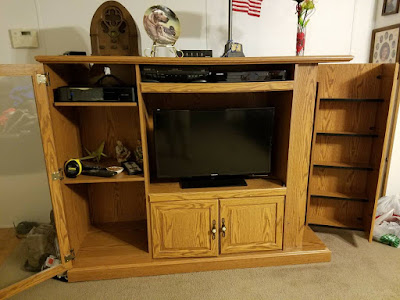 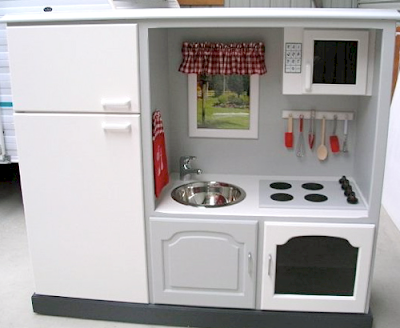 My granddaughter is only four months old, so I won't need a play kitchen for years, and I don't want to store a bulky entertainment center in my garage all that time. I could put it in the basement until I'm ready to transform it, but it will need to be sanded before it can be painted, and I don't want to do that inside the house. And, I'm sure that when I get the hankering to start working on it, there will be no men around to bring it back upstairs, and it's far too heavy for me to move.

I put that idea temporarily on hold because I really wanted the same Little Tikes Country Kitchen my kids had. After obsessively checking eBay and Craigslist for weeks ... I found another one! It was priced right, but it was for pickup only ... two states away. I Googled the location and discovered it was "only" 175 miles away, bought the kitchen, and made arrangements to pick it up Black Friday.

It was a long, silent day ... but I got the exact Little Tikes Country Kitchen my kids had, and it was worth every boring mile. It's very sturdy, but lightweight enough for me to move around by myself. When my grandbabies are big enough to play with it, they'll be playing in the "same" kitchen their parents did. I don't remember my son being interested in the kitchen, but his daughter will love it. My girls spent most of their early childhood preparing delicious plastic food for me to eat ... and I spent most of their childhood "eating" wonderful meals like a fried egg, peas, and french fries ... or bacon, carrots, and watermelon ... which I washed down with gallons and gallons and gallons of coffee. I saved all the kid's dishes and play food, so I expect to spend my granddaughter's childhood eating the same exquisite cuisine.

I know I jumped the gun by a few years buying this kitchen now, but seeing my children's children cooking in a Little Tikes Country Kitchen will give me immense pleasure. I'll enjoy it as much as they do!
Posted by Jackie Coleman - Author at 9:10 AM