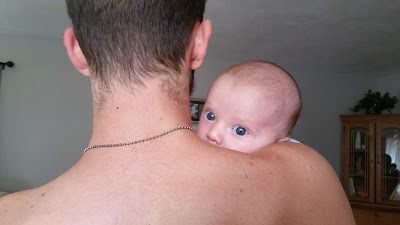 I took this photo of Davy and his baby girl peeking over her Daddy's shoulder when she was only a few weeks old with the intention of taking a photo of her dancing at her wedding with her Daddy, peeking over his shoulder as a grown woman on her special day. I planned on getting a double frame to show them side by side ... as a gift for both of them. I tried to get him to put on a shirt for this picture, but Davy only wore a shirt if it was absolutely necessary.

I was always telling him he couldn't run around like "a naked savage" (to quote Aunt Bea … of the Andy Griffith Show), but he'd just laugh. He'd always take walks or ride his bike at night wearing only shorts … once he turned 18,. Before then, I wouldn't let him. Even after he was 18, I told him he needed to put on a bright colored shirt … or glue headlight pasties to his nipples and a strap flashing light to his butt. Once again, he laughed. When you're his age, you're invincible.

For a while, he actually had me convinced he was invincible! Davy was like a cat with nine lives. Who else ends up in ICU, in a coma, on a ventilator without a cut or broken bone? I thought that call in the middle of the night was a parents worst nightmare. As I stood by his bedside all day, and slept on the pull-out sofa in his room all night, I do remember thinking I was lucky … I knew where my son was. He wasn't missing and I didn't have to wonder if he was alive or dead like some parents, I remember being grateful it was a nurse that called me and told me he was in ICU on a ventilator … not the coroner and police showing up at my door with a sentence that starts out "We're sorry to inform you that …". But I was wrong … the call from the nurse that night was not a parents worst nightmare.

Now, my little granddaughter will never get the chance to dance with her Daddy at her wedding and neither will be able to receive a gift I've planned on since the day we found out they were having a little girl.

His kids are lucky, though. Their mother is dating a man who loves those babies as if they were his own. She'll get to dance at her wedding with the man who raised and loved her. She'll dance with someone she calls "Daddy", but it won't be her real Daddy … it won't my son.

Once again, please keep an eye out for the car that killed him. … 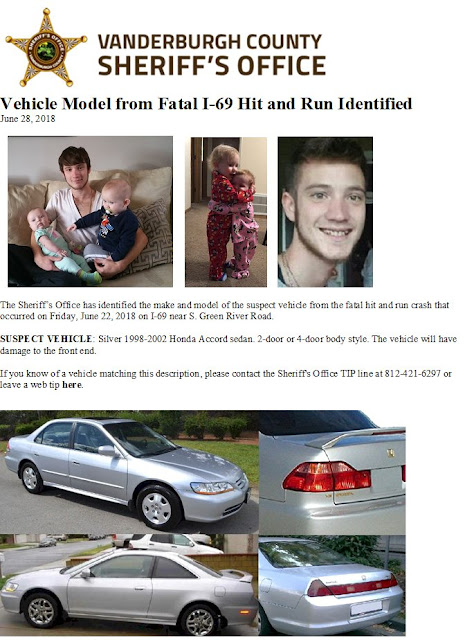 Posted by Jackie Coleman - Author at 8:20 AM