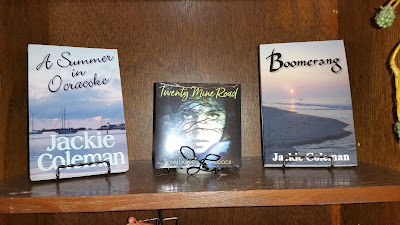 As it stands right now, our lifetime achievements of the heart can fit on one shelf, but that is soon going to change. I've been busy finishing my third novel and John is working on new music. I'll keep you updated on when you can expect to see my next story and reveal the cover when I'm close to publishing. This is exciting!

UPDATE: I originally wrote this in mid-June, but hadn't posted it yet. I will NOT be finishing my third novel, which is a shame, because I think the story was really good … and it was almost done. Ironically, the story revolved around an unsolved, decades old, fatal hit-and-run. After my son dying in that very scenario just weeks ago, I can't finish it. I can't even go back and read it. I don't even want it on my computer.

I have other ideas for another novel, but at the present time, I'm in no frame of mind to begin a novel. I feel like my time is better spent putting up fliers and trying to find the person who killed my son. One day I'll start writing again, but I'm going to have to take a hiatus at this point.

John will still be writing and recording songs, so his collection will grow … but mine will remain unchanged … for now.

Posted by Jackie Coleman - Author at 6:34 AM