A Painting of Davy

Not long after Davy died, a childhood friend, Ben, told me he wanted to paint a picture of Davy. I was thrilled! He said he wanted to try a new technique he'd been working on ... painting on glass. He came over one afternoon and we picked out a dozen or so pictures of Davy.

Ben was a true friend all through Davy's childhood. They were thick as thieves. Ben lived a few houses up the hill, and those boys played from the time their feet hit the ground in the morning until they were called in for the night. They were always so dirty at the end of the day! I didn't mind at all ... it meant he had fun ... and the dirt was nothing a little soap and water couldn't take care of. Ben confided in me, just lately, that they would climb the massive pine tree in our backyard to see who could go the highest. That tree is at least 100' tall! I'm glad I hadn't seen it. My heart would have stopped!

Ben came to the funeral home when Davy died. He was inconsolable. He was the same at the funeral. His family came to the visitation and funeral separately from him. Their adult kids were crying and the parents could hardly hold it together.

When we planted Davy's dogwood, it only seemed right that Ben be there.

A few weeks ago, he messaged me and said he'd had a dream the night before. In his dream, I came up to him, crying, asking him if he knew where Davy was. He just looked at me, knowing Davy was gone, then he started crying. He said he woke up thinking about the painting, that he had yet to start, and that it was really pressing on his heart that he needed to do this. Now.

Not long afterwards, he sent me a couple of pictures of the process as he painted Davy. He chose a picture of Davy sitting on my sofa, with a sweet, satisfied smile on his face, as his infant son lay fast asleep on his chest.

Here's the picture he painted from ... 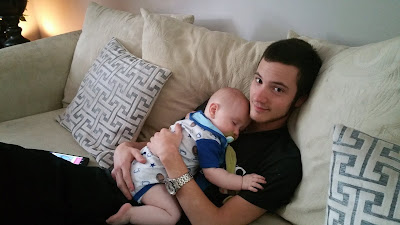 The beginning of the project ... 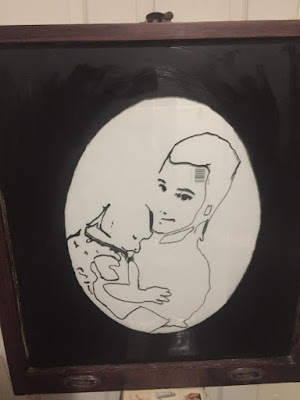 The finished project, with a white matte behind the painting ... 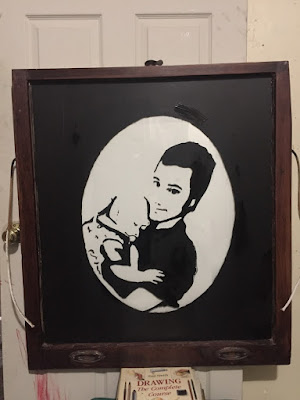 The finished project without the white matte. He said he was going to put a mirror behind the painting so that we could see our reflection, too, when we looked it. 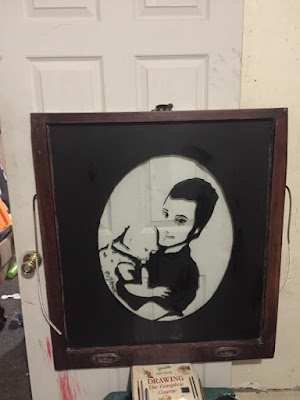 I don't have it yet ... but I know exactly where I'm going to hang it once I get my hands on it. What an incredibly kind thing this young man did for me. His expression of grief and pain at Davy's passing was impossible to miss.

It touched my heart that pretty much all of Davy's childhood friends ... and many times their entire families ... came to both the visitation and the funeral. All of his friends were crying very hard or trying very hard not to.

Davy, I don't think you have any idea of how many hearts you touched. I miss you, Buddy.
Posted by Jackie Coleman - Author at 5:41 AM