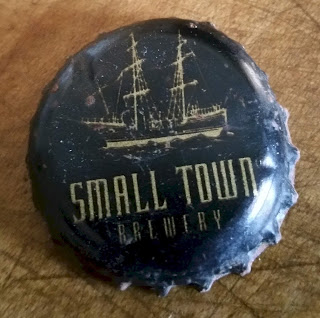 In the days just after Davy was killed, I was so restless. I was trying to do my best to keep my mind occupied, but that was an impossible task. No matter what I did, I thought about Davy the entire time.

One day, I went for a walk in my woods and found this bottle cap. It was the ship on the bottle cap that caught my eye. Davy liked pirate lore, and was thrilled when we vacationed on Ocracoke Island, where Blackbeard was killed.

I picked up the bottle cap and put it in my pocket. When I got back inside, I put it on the shelf, above Davy's picture. It's been there ever since.

I looked up "Small Town Brewery" on the internet. It's in Wauconda, Illinois. It looks to be a fairly new brewery, so the bottle cap is not decades old ... meaning it's very possible it's from when his best friend, Zach, would come over. They'd sit outside, build a fire in the upper fireplace, drink a few beers, talking and laughing under the stars until the wee hours of the morning.

It might not be Davy's, but I like to think it is, and it makes me smile to remember those two "boys" hanging out and having fun ... and I can easily see Davy flipping this bottle cap into the woods to see how far he could make it go. That's definitely something Davy would do!

So when I found it, it brought me a small bit of comfort ... I was touching something Davy had touched.
Posted by Jackie Coleman - Author at 5:27 AM